Power for the 63 comes courtesy of the familiar 4.0-litre twin-turbocharged V8, now equipped with the 48-volt mild-hybrid EQ Boost system that releases an additional 16kW/250Nm. Having made the rounds online since last year in spy images and pre-production snaps, Mercedes-AMG has officially taken the covers off of the GLE 63 and the monstrous GLS 63, as well as their more powerful S derivatives, at the Los Angeles International Auto Show. 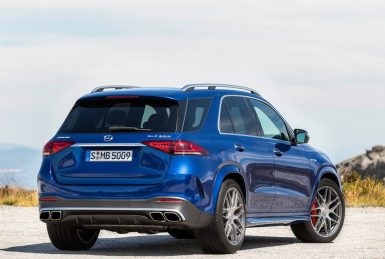 With its debut in the City of Angels coming exactly 20 years after the original ML 55 AMG, the GLE 63 identifies itself as the range topping model by sporting the GT R derived Panamericana grille and so-called jet-wing front apron with black air intakes, as well as the AMG sport exhaust with dual rectangular outlets, a bespoke rear apron with an integrated silver strip diffuser, flared wheel arches, power domes on the bonnet and 20-inch AMG light alloy wheels with the S getting 21-inch alloys.

From the options list, both models can be had with differently designed 21 or 22-inch wheels, as well as the Night Package that sports a dark tinted finish on the front splitter, side skirts, on the front and rear aprons, around the windows and on the mirror caps with the aforementioned exhaust system getting a black chrome finish.

Setting itself further apart from the regular GLE, the revisions underneath the 63’s exterior are extensive with both receiving the AMG Ride Control+ air suspension with three modes; Comfort, Sport and Sport+, the AMG Dynamic Select system with four settings; Comfort, Individual, Sport and Sport+ with the S adding a Race mode and the Active Ride Control system activated by a 48-volt electrical system.

Added to the Dynamic Select are two off-road settings; Trail and Sand with the selection of either resulting in the ground clearance rising by 55 mm, but lowering again when the speed exceeds 70 km/h. In addition to the performance optimised 4Matic+ all-wheel-drive system that comes with an electronic locking rear differential and variable torque distribution, the 63 and 63 S are also outfitted with upgraded brakes consisting of a six-piston caliper setup at the front and single floating piston at the rear, with the discs measuring 400 mm and 370 mm respectively.

Painted grey on the standard 63 and red on the S, the brakes can however be upgraded to the optional carbon ceramic stoppers with the same caliper and disc configuration, but identified by its bronze hue and weighing lighter than the mentioned steel units.

Inside, the AMG touches comes in the form of bespoke readouts and dials located within the instrument cluster and MBUX infotainment system, while the standard AMG seats are trimmed in Nappa leather with AMG badged backrests. Also included is the AMG Performance steering wheel trimmed in black Nappa leather or Nappa/Dinamica micro-fibres in the S, with both sporting aluminium gear shift paddles and black 12 o’clock marking, AMG branded aluminium and carbon inlays, as well as AMG branded illuminated door sills and floor mats.

Like with AMG’s recent models, power for the 63 comes courtesy of the familiar 4.0-litre twin-turbocharged V8, now equipped with the 48-volt mild-hybrid EQ Boost system that releases an additional 16kW/250Nm for shorts bursts. In standard form though, the V8 produces 420kW/750Nm and 450kW/850Nm in the 63 S with both being hooked to a nine-speed MCT transmission that sports a double declutching function in Sport, Sport+ and Race modes. While both are limited to 280 km/h, the 63 will get from 0-100 km/h in four seconds and the S in 3.8 seconds. Like its junior sibling, the GLS, previously known as the GL, is also offered in standard and S guises with not only the same distinguishing exterior features and changes underneath its skin, but also the same drivetrain.

Riding on 21-inch 10-spoke AMG light-alloys as standard with up to 23-inches available, the seven-seat GLS does however comes with a slightly different instrument cluster sporting the Modern Classic, Discreet, Sport and Supersport background themes, as well as a different AMG steering wheel. 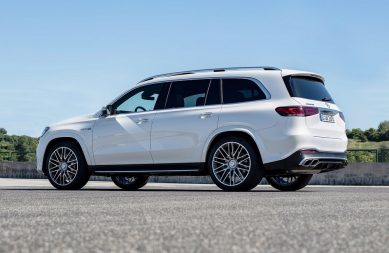 Carried over from the GLE though is the AMG Dynamic Select system, the AMG Active Ride Control+ air suspension with added roll stabilisation and the upgraded brakes plus the AMG tuned electric power steering.

As mentioned, the GLS come powered by the same engine as the GLE with the electrically assisted V8 making 420kW/750Nm in the regular 63 and 450kW/850Nm in the 63 S. A nine-speed MCT delivers the amount of twist to all four wheels with the S getting to 100 km/h from zero in 4.2 seconds before topping out at 250 km/h or 280 km/h with the optional AMG Driver’s Package. 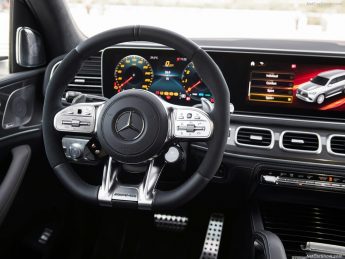 While no pricing details were announced at the North America showpiece, expect both the GLE 63 and GLS 63 to arrive in South Africa next, but only in S guises.