After a short teaser campaign launched earlier this month, Honda has officially revealed the fifth generation City in Thailand that is likely to come to South Africa next year as the all-new Ballade.

Taking styling traits from the new Jazz and the hybrid-only Insight, the City boasts Honda’s Solid Wing front appearance highlighted by new projector-type LED headlights and a thick grille bar. At the rear, it takes after the smaller Amaze on first glance, but with unique U-shaped LED lights and inlets integrated into the flanks of the bumper.

Measuring 4 553 mm in overall length with a wheelbase of 2 589 mm, height of 1 467 mm and width of 1 748 mm, the City is 113 mm longer overall than its predecessor, but 11 mm shorter in wheelbase, 10 mm lower and 53 mm wider than before with an expected increase in boot space set to be confirmed at a later stage. 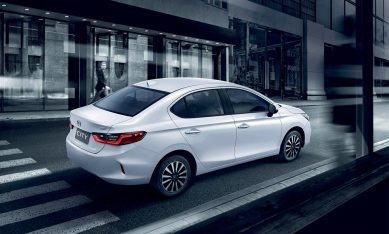 Inside, the interior is all new with pride of place going to an integrated eight-inch touchscreen infotainment with Apple CarPlay and Android Auto in place of the touch-panel setup previously used. While the display design is unique to the City, the climate control panel takes after that of the Jazz, while both the steering wheel and gear lever are new.

Up front, and in a first for the City, motivation comes from a turbocharged petrol engine in-line with the newcomer now falling under Thailand’s Eco Car regulations that offers tax benefits for cars falling in this category.

Displacing 998 cc’s, the blown three-cylinder produces 90kW/173Nm and comes mated to a CVT only, with Honda claiming a combined fuel consumption figure of 4.3 L/100 km. A 1.5-litre mild-hybrid unit taken from the Jazz has also been included, but no technical details were divulged. 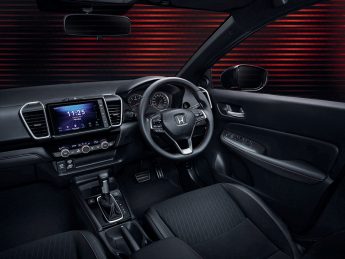 In Thailand, the City will be offered in four trim levels; S, V, SV and the RS that comes with sportier front and rear bumpers, a gloss black honeycomb grille, wider door sills, gloss black mirror caps, an integrated boot spoiler, model specific 16-inch alloy wheels, an exclusive Ignite Red paint finish option and on the inside, red stitching on the instrument panel, suede leather seats with red stitching and a model only Ignite Red.

As mentioned, the City is likely to arrive in South Africa next year again as the Ballade, but it remains to be seen whether it will feature the same drivetrain and level of specification.