Aston Martin has introduced yet another special edition version of the DBS Superleggra, this time as a tribute to Concorde.

Part of Gaydon’s so-called Wing Series that included the Vantage V12 S Spitfire 80, Vantage Blades Edition and more recently the Vanquish S Red Arrows Edition, the Concorde is the result of Aston’s Q Division and celebrates 50 years of the world’s first and so far only supersonic passenger plane. Inside, the unique touches consist of Concorde logos on the facia, titanium gear shift paddles said to have been made from the plane’s compressor blades, sold aluminium milled seatbelt buckles, sonic boom graphics made from Alcantara on the headliner, special door sill plaques, a Mach Meter graphic embroidered into the driver’s sun visor and a Terence Conran pattern on the floor mats. 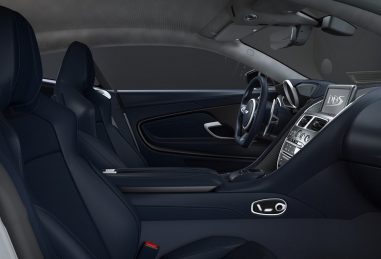 Boasting the final Concorde that now resides at the Bristol Aerospace Museum’s identification number on the rear fender, G-BOAF, the DBS’ AMG-sourced 5.2-litre twin-turbo V12 has remained unchanged with its 533kW/900Nm once again being send to the rear wheels via an eight-speed Touchtronic automatic gearbox. As with the standard DBS, expect a 339 km/h top speed and 0-100 km/h in 3.4 seconds.

Limited to just 10 units, the Concorde Edition will be sold exclusively through Aston Martin Bristol with no pricing having been revealed.