Q7 comes with a choice of three modes for the system; the full-electric and default ‘EV’ and ‘Hybrid’ that boasts two individual settings Audi has expanded its plug-in hybrid offerings to the recently updated Q7 as part of the newly badged TFSI e range of models.

While featuring the same assortment of, exterior and interior options, as well as tech as the standard Q7, the TFSI e reserves its biggest difference for underneath the bonnet where the 3.0 TFSI V6 engine has been teamed with an electric motor. 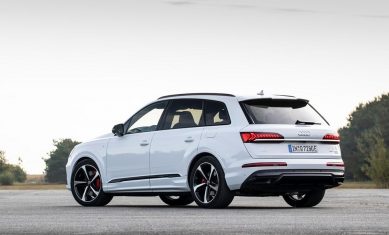 Serving as range topper, the 60 TFSI e uses the same battery pack and transmission, but with the amount of twist upgraded to 335kW/700Nm. Top speed is limited to 240 km/h with 100 km/h from naught coming up in 5.7 seconds. The claimed all-electric range is however unchanged from the 55 TFSI e.

As with recent plug-in hybrid versions of the A6, A7, A8 and Q5, the Q7 comes with a choice of three modes for the system; the full-electric and default ‘EV’ and ‘Hybrid’ that boasts two individual settings; ‘Auto’ which combines the petrol engine and electric motor and ‘Hold’ that stops the battery at its remaining level of available power.

Retaining Audi’s Drive Select system, the TFSI e however adds a seventh setting in the form of EV to the existing modes, made up of Efficiency, Comfort, Auto, Dynamic, Individual and Allroad, the latter available in conjunction with the optional Adaptive Air Suspension. Unique to the TFSI e is the so-called gliding function that only switches off the engine when moving slowly, but which then recuperates and feeds as much as 25 kW back into the battery. 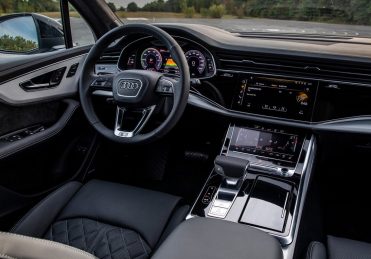