Turbo S comes powered by an all-new development of the 3.8-litre twin-turbocharged flat-six that produces 478kW/800Nm. Easily one of the most revered models within the enduring 911 range, Porsche has revealed the all-new 992 generation Turbo S set to have debuted at the Geneva Motor Show.

Slotting-in above to the still-to-be-seen ‘regular’ Turbo, the S differentiates itself from the lesser Carrera by receiving standard issue Matrix LED headlights with darkened clusters, wider air intakes on the flanks of the front bumper, gloss black exhaust outlets, and a redesigned pneumatically raising and lowering rear spoiler that is claimed to produce 100 kg of downforce. 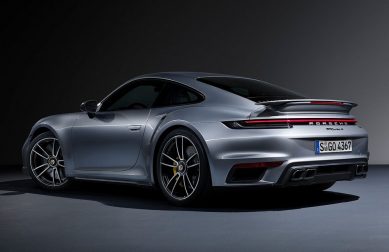 Riding on centre-lock alloy wheels measuring 20-inches at the front and 21-inches at the rear, the Turbo S has also changed underneath its skin where the front track has been widened by 42 mm and the rear by 10 mm, while the inclusion of the Porsche Active Suspension Management (PASM) has further resulted in a 10 mm ride height drop.

Sporting controlled cooling flaps and measuring 20 mm wider overall at 1 900 mm than the 991.1 Turbo S, the 992’s interior has been revised with 18-way adjustable sports seats whose stitching pays homage to that of the 930 generation 911, a GT steering wheel, carbon and light silver inserts, full leather upholstery, the Sports Chrono package and a Bose surround sound system. 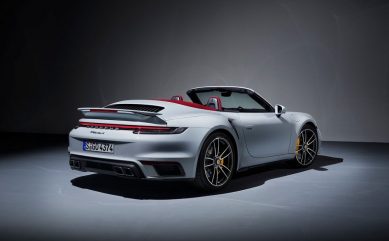 Nestled at the rear, the Turbo S comes powered by an all-new development of the 3.8-litre twin-turbocharged flat-six engine equipped with a new cooling system, piezo injectors, an electrically adjustable wastegate flap and bigger twin VTG blowers, which has resulted in an output of 478kW/800Nm. 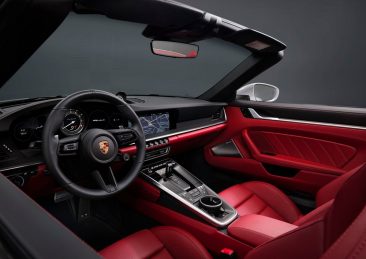 Confirmed for South Africa with sales commencing in May, pricing for the Turbo S kicks-off at R3 542 000 for the coupe and at R3 716 000 for the cabriolet with a three year/100 000 km Driveplan standard on both.