The new oil-burner produces 148kW/440Nm, but is now paired to a brand-new eight-speed dual-clutch ‘box. Ahead of its official debut via online streaming on Facebook tomorrow (19 March), Kia has finally detailed the all-new Sorento in European specification.

Unveiled last month with only select information being disclosed and in subsequent weeks, the South Korean automaker has finally divulged more intricate details of what goes on beneath the Telluride-inspired newcomer’s body.

As a reminder, the Sorento is once again offered with five or seat seats and rides on an all-new SUV optimised platform known internally as N3 with confirmed dimensions of 4 810 mm in overall length, a wheelbase of 2 815 mm, height of 1 695 mm and width of 1 900 mm. Coming in at 10 mm longer overall than its predecessor, the new platform has also resulted in a 35 mm gain in wheelbase with the mentioned width being 10 mm wider. 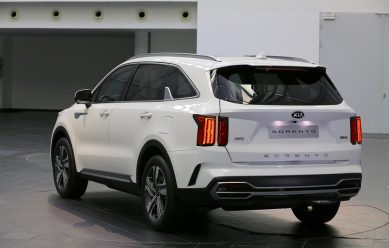 Tipping the scales at 80 kg less than its predecessor, the Sorento, in Europe, will come with the option of two engines, the first being the latest iteration of the new Smartstream turbodiesel that once again displaces 2.2-litres. Made out of a aluminium that helps cut weight by 38.2 kg compared to the previous cast iron CRDI unit, the new oil-burner produces 148kW/440Nm, but is now paired to a brand-new eight-speed dual-clutch ‘box as opposed to the previous six-speed torque-converter automatic.

As mentioned, the Sorento now comes with the option of a hybrid drivetrain that combines a 1.6 T-GDI engine with a 44.2 kW electric motor for a total system output of 162kW/350Nm. Hooked to a six-speed automatic ‘box, the hybrid will only be offered in select European countries and like its diesel sibling, have the option of front-or-all-wheel-drive. 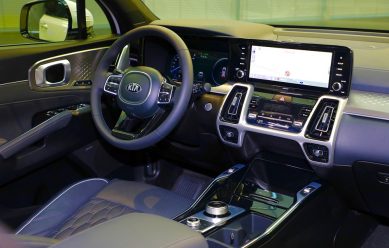 With alloy wheel sizes ranging from 17-20-inches, ground clearance is rated at 176 mm for the diesel and 174 mm for the hybrid with braked towing capacity of 2 500 kg for the latter and 1 650 kg for the former. A plug-in hybrid model will be added a later stage.

Outside of Europe, the North American market Sorento will do without the diesel and instead come powered by the same 2.5 T-GDI as the Optima which makes 210kW/420Nm, send to the ground via the same eight-speed dual-clutch ‘box. In Australia, the outgoing model’s normally aspirated 3.5-litre V6 petrol that makes 206kW/336Nm will supplement the diesel.

Going on sale in Europe from the third quarter of this year, the Sorento, unlike the North American model, will be sourced from Kia’s Hwasung plant with South Africa forecasted to receive the newcomer before the year is up.