Aside from the plug-in hybrids, the rest of the 5 Series line-up are all equipped with a 48-volt mild-hybrid system. UPDATE: BMW South Africa has confirmed that the 5 Series will become available from the fourth quarter of this year with the range consisting of the 520d and 530i in rear-wheel-drive only, the M550i xDrive as well as the M5 Competition. As before, only the sedan will offered with pricing to be revealed closer to the actual launch date.

After numerous online leaks and official teasers, BMW, overnight, unveiled the facelift 5 Series sedan and Touring scheduled to go on sale in Europe from July. 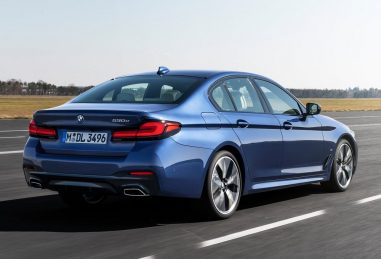 Inside, the interior’s changes are less dramatic with the biggest being the new 12.3-inch iDrive infotainment system sporting the 7.0 operating system in place of the previous 10.25-inch display. Small changes abound otherwise such as a new high gloss black finish for the centre console, optional multi-function M Sport seats derived from the M5 and more sound insulation in the boot area of the Touring.

Underneath its nipped-and-tucked skin, BMW has lengthened the CLAR platform by 21 mm overall in the case of the sedan and 27 mm in the Touring. While the actual wheelbase, width and height dimensions are unchanged, the latter now comes with air suspension as standard while the Integral Active Steering system has been revised to better assist when cornering at low speeds.

Boot space is unchanged though with the sedan offering 530-litres and the hybrid 410-litres, while the Touring’s loading capacity ranges between 560-1 700-litres and 430-1 560-litres, the latter as a result of the location of the battery on hybrid models. 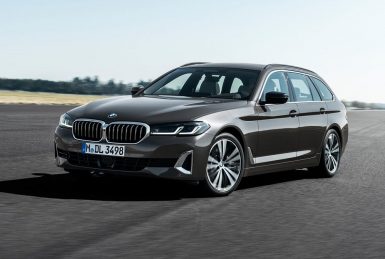 On the technology front, Android Auto premieres along with wireless smartphone charging, over-the-air updates, optional Parking Assistant with a surround view camera, plus Remote Control Parking as part of the updated safety and driver assistance system.

Like principal rivals Audi (A6) and Mercedes-Benz (E-Class), the 5 Series now makes broader use of hybrid power with the newest addition being the plug-in hybrid 530e. Set to become available later this year, the model combines the familiar 135 kW 2.0-litre turbocharged petrol engine with an 80 kW electric motor, which features a 10 seconds overboost function dubbed XtraBoost that results in a combined output of 215kW/420Nm.

Mated to the eight-speed Steptronic gearbox with or without xDrive all-wheel-drive, the 530e has a claimed all-electric range of 67 km and 58 km respectively with the Touring model boasting emissions free driving ranges of 62 and 56 km. 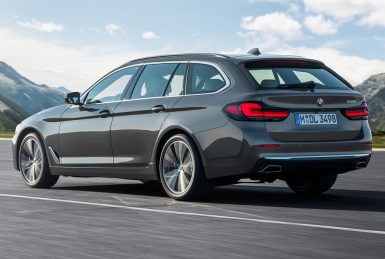 At a later stage, a second plug-in hybrid model will be added, the 545e which swaps the 2.0-litre engine for an electrified 3.0-litre straight-six outputting a combined 290kW/600Nm. Fitted with xDrive as standard, the 545e has a claimed all-electric range of 57 km and will only be offered as a sedan.

Aside from the plug-in hybrids, the rest of the 5 Series line-up are all equipped with a 48-volt mild-hybrid system than adds an additional eight kilowatts for short spells. In standard guises however, both the 520i and 530i are powered by a 2.0-litre turbocharged petrol producing 135kW/290Nm and 185kW/350Nm, while the 540i delivers 250kW/450Nm from its 3.0-litre turbocharged straight-six.

Sitting at the top-of-the range is the M550i which keeps the twin-turbocharged 4.4-litre V8 rated at 390kW/750Nm. It is also the only the petrol model to feature xDrive as standard with both the 530i and 540i having it as an option. The only transmission offered is the mentioned eight-speed Steptronic. 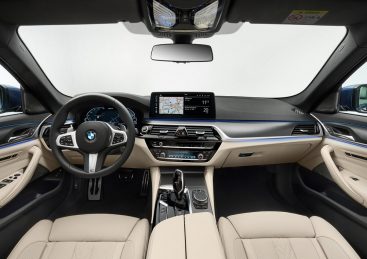 Diesel-wise, three models are offered, now with their engine benefitting from two-stage turbocharging; the 2.0-litre 520d rated at 140kW/400Nm, the 530d whose 3.0-litre straight-six pushes out 195kW/620Nm and the twin-turbocharged 540d whose straight-six punches out 235kW/680Nm.

With the discontinuing of the quad-turbo 550d, this is now the flagship oil-burning 5 Series and like the M550i, it also comes standard with xDrive which can be specified on the 520d and 530d as an option. Also standard on all is the eight-speed Steptronic ‘box.

As indicated, sales of the 5 Series will commence in July but with local specification and pricing still to be confirmed, expect it to arrive in South Africa either towards the end of the year or in early 2021.