Hybrid system also comes standard on a more powerful EcoBoost derivative where the output is rated at 115kW/240Nm.

Having made mild-hybrid technology available on the Puma on Europe, Ford has now introduced the electrified powertrain in question to the Fiesta, a first for the Blue Oval’s B-segment hatch.

Combined with the 1.0 EcoBoost engine, the 48-volt belt starter/generator adds an additional 24 Nm, resulting in the output staying at 92 kW, but lifting the torque figure from 170 Nm to 194 Nm. According to Ford, a five percent improvement in fuel consumption has been obtained with the combined figure now standing at 4.9 L/100 km and emissions at 109 g/km.

In addition, the hybrid system also comes standard on a more powerful EcoBoost derivative where the output is rated at 115kW/240Nm. Claimed fuel consumption is 5.1 L/100 km and emissions slightly up to 116 g/km. Somewhat surprisingly, both engines are paired to a six-speed manual gearbox only with no automatic being available.

Despite the hybrid becoming mainstay option, buyers can still opt for either the non-electrically assisted EcoBoost that punches out 70 kW in base models, or the 1.5 TDCi that produces 62 kW. Like the hybrid, only a six-speed manual ‘box is offered.

An automatic gearbox option is still offered, albeit now in the shape of a new seven-speed dual-clutch in place of the six-speed torque converter. Available only with the EcoBoost, power now stands at the same 92 kW as the entry-level hybrid as opposed to the 74 kW from before. 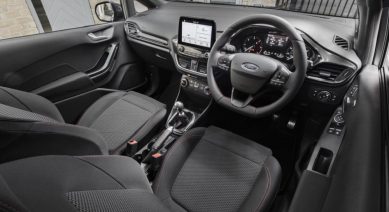 In the UK, the range is made up of six trim levels; Trend, Titanium, Titanium X, ST-Line, ST-Line X and Vignale as well as two versions of the off-road inspired Active; base and X. Pricing kicks-off at £19 860 (R423 038), but for the entry-level hybrid in Titanium spec.

At present, none of the revisions are expected to feature on South African-spec models.