Lamborghini provides clearer preview of most powerful, extreme model ever made

Lamborghini has divulged more details and revealed images, albeit still heavily disguised, of its most powerful, track-day only hypercar ever made. Teased three months ago, at which stage it was rumoured to carry the Aventador SVR designation, the model will instead be called the SCV12 and, according to Saint’Agata’s, will be capable of “exceeding 830 hp” or 619 kW, a figure that trounces the original 610 kW estimate and the 544 kW of the Aventador SVJ.

The project of the raging bull’s Squadra Corse motorsport division, the SCV12 is said to have better aerodynamics and downforce than a current GT3 racer, with attributing factors being the front splitter and custom carbon fibre rear wing, dual air intakes on the bonnet, airscoop on the roof and fins on the side sills. 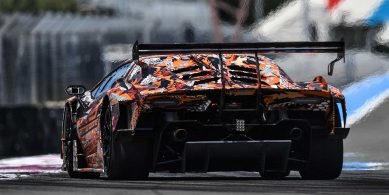 Mounted on a bespoke carbon fibre chassis, the SCV12 will channel all of its power to the rear wheels via a six-speed sequential gearbox and ride on specially made magnesium rims measuring 19-inches at the front and 20-inches at the rear. Special Pirelli slick tyres are standard.

An exact launch date has not yet been announced with Lamborghini merely stating that the wraps will be taken off during the current European summer.