Most radical change is to be find at the rear where the Bentayga gains the same full-width elliptical LED lights as the Continental GT. Unveiled five years ago as its first SUV, and also most controversial new addition, Bentley has taken the wraps off of the facelift Bentayga.

A runaway success for Crewe with global sales of 20 000 units, the updates sees the Bentayga falling in-line with the Continental GT and Flying Spur in that it receives elliptical LED headlights, a redesigned front bumper and matrix grille, raised by 30 mm nose and new fenders on each corner. Despite no changes having taken place in the overall length and wheelbase departments, Bentley has widened the track by 10 mm and included a 22-inch alloy wheel option for the first time.

The most radical change is to be find at the rear where the Bentayga not only gains a new wraparound style tailgate, but also the same full-width elliptical LED lights as the Continental GT which, like the fronts, have been inspired by crystal glassware.

A new bumper, now housing the number plate cavity, and longer bootlid spoiler rounds the changes off, along with two new colours; a mid-tone off-white hue dubbed Patina and the same metallic green as that of the EXP 10 Speed 6 concept known as Viridian. 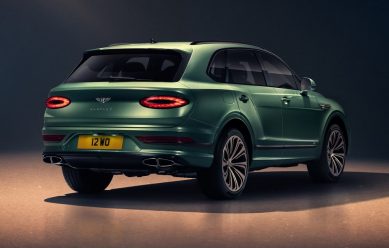 Inside, Bentley has redesigned the centre console to accommodate a new 10.9-inch touchscreen infotainment system with Apple CarPlay and Android Auto, while the instrument cluster now features a 10.3-inch all-digital binnacle. In addition to the new air vents and Heads-Up Display, plus the inclusion of a wireless smartphone charger, the Bentayga benefits from the same steering wheel as the Continental GT, upgraded seat and door materials as well as two new wood veneers; Crown Cut Walnut and Koa.

On the seating front, three options are offered; the standard five seats now with the option of heated and cooled rear chairs as well as micro-piping and bespoke switch work, an optional third row and captain-style four-seat configuration which has led to a 30 mm increase in knee room and nearly 100 mm in the fully-reclined position.

Up front, the Bentayga will initially be powered by 4.0 twin-turbocharged V8 that once again produces 405kW/770Nm. Paired to an eight-speed automatic gearbox, top speed at rated at 290 km/h with the 0-100 km/h sprint taking 4.5 seconds. With the axing of the diesel model in most markets last year due to poor sales, the engine line-up will be bolstered at a later stage by the Hybrid, whose electrified 3.0-litre V6 punches out 340kW/700Nm, and the familiar 6.0 TSI W12 that will again be reserved for the Speed.

Although no pricing details were announced, expect a noticeable increase over the current R3 395 000 starting price for V8 when sales commence either later this year or in 2021.