Model positioned below it won’t be happening soon due to “Isuzu’s core focus [being] on light commercial vehicles and trucks”. In spite of the ongoing rise in SUV sales both in South Africa and globally, Isuzu has confirmed it has no plans on introducing a smaller model below the MU-X.

Currently the automaker’s only SUV, and the third to exist in its non-commercial vehicle line-up, the others being the D-Max pick-up on which it is based and the Toyota Innova-sized Panther MPV sold in Southeast Asia, the MU-X, which received a mid-life facelift two months ago, currently rates as the best-selling unibody seven-seat SUV in Australia with monthly sales regularly topping 1 000 units.

Despite having being on sale globally since 2013 and 2018 in South Africa after replacing its sibling, the Chevrolet TrailBlazer following the departure of General Motors the year before, sales have been sluggish compared to those of the segment-leading Toyota Fortuner and Ford Everest, often struggling to reach three figures. 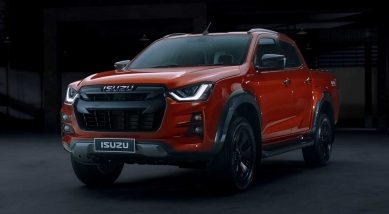 However, no replacement spun-off of the new D-Max is being forecasted with Isuzu South Africa’s Corporate Affairs, Business Strategy and Legal Head, Denise van Huyssteen, stating that a model positioned below it won’t be happening soon due to “Isuzu’s core focus [being] on light commercial vehicles and trucks”.

With the Japanese automaker also upgrading its factory outside Port Elizabeth for production of the D-Max from next year, van Huyssteen, when quizzed about the possibility of the single and extended cab models re-joining the double cab, and whether the 110kW/350Nm 1.9 BluePower oil-burner would be offered alongside the 140kW/450Nm 3.0 D-TEQ, said that a “a cross functional project team is spearheading the project to ensure delivery in line with key milestones” and that it would be “premature” to divulge details ahead of the model’s debut.

At present, the D-Max is reportedly set to go on sale in Australia from September with a likely starting price of around $30 000 (R352 306) Unlike the South African version though, the Aussie D-Max will be sourced from one of Isuzu’s two plants in Thailand and reportedly only have the mentioned 3.0-litre engine paired to a six-speed manual or six-speed automatic gearbox with the option of rear-or-four-wheel-drive.