South African rider Brad Binder, who finished eighth at the Mandalika circuit, is lying second in the season standings after two races. 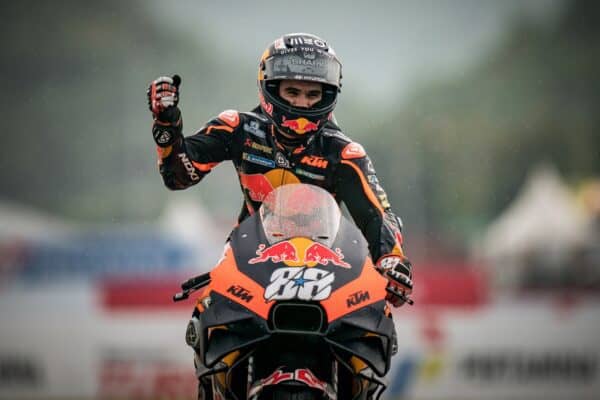 Miguel Oliveira held his nerve to win a rain-affected Indonesian MotoGP on Sunday and then promised to give the trophy to his baby daughter.

The Portuguese KTM rider finished 2.205sec ahead of current world champion Fabio Quartararo, of France, who had started from pole position on his Yamaha.

Another Frenchman, Johann Zarco, completed the podium a further 3.158sec adrift for the Pramac Racing team in a race reduced to 20 laps from 27 because of safety concerns.

“It’s really emotional,” said Oliveira. “I promised my daughter I would get a trophy from Indonesia, so this one is for you baby.”

The start at the Mandalika International Street Circuit was delayed for 75 minutes by heavy rain as grand prix racing returned to motorcycle-mad Indonesia for the first time in a quarter of a century.

When it did eventually begin, Quartararo bolted into the first corner comfortably ahead but by the end of the first lap had been reeled in by Oliveira and Australia’s Jack Miller, on a Ducati.

It did not take Oliveira long behind the Australian to realise he had the grip and pace to stretch away on the sodden track.

“I followed Jack for a couple of laps and then I understood that I could still go a bit faster,” said Oliveira.

“When I overtook him, I just tried to focus for the next five laps,” said Oliveira, who took his fourth victory, after winning the Styrian and Portuguese Grands Prix in 2020 and the Catalunya race last season.

“Then I built the gap and I was managing it the whole race but it was, for sure, not easy.”

Miller finished fourth, with the Spanish pair of Alex Rins and Joan Mir fifth and sixth.

World championship leader Enea Bastianini of Italy, who won the season-opening race in Qatar two weeks ago, struggled in the wet and could only finish 11th after starting on the second row of the grid.

The Italian remains top of the world championship standings after two races on 30 points, two ahead of South Africa’s Brad Binder with Quartararo one point further back in third.

Oliveira’s 25 points for victory elevated him to fourth in the standings.

Quartararo was delighted to fight back to grab what he said was his first podium in the wet, after struggling in the opening laps and dropping to fifth at one stage.

“To be honest, from the warm-up lap I felt like we have something extra, because we know that in the wet condition we are struggling always,” said Quartararo.

“So I saw an opportunity and I go for it. I think it’s my first podium in the wet so I’m super happy because we found something in the wet.”

Zarco was a little disappointed that he was unable to push hard early in the race and by the time he figured out the track and grip it was too late to finish any higher than third.

“It’s a podium in MotoGP which is always nice, but really I needed a little bit of time,” he said.

“So I lost too much time at least for the second place, but when the truck was clear, I could be very fast. So third place, I take it.”

Six-time world champion Marc Marquez was earlier ruled out with concussion after a horror morning warm-up crash that catapulted him into the air on turn seven.

The Spaniard’s Honda cartwheeled end-over-end as it disintegrated with Marquez appearing to land heavily on his left arm and hitting his helmet on the ground at around 180 km/h.

A shaken Marquez got to his feet and gingerly walked away before being taken to a nearby hospital for medical checks where he was declared unfit to race.

Marquez had already suffered a bruising weekend, having two crashes during qualifying on Saturday.

MotoGP was returning to Indonesia for the first time since 1997 at the new venue on the resort island of Lombok.