SUV equivalent of the M340i thrills while trying to live up to the M expectations. 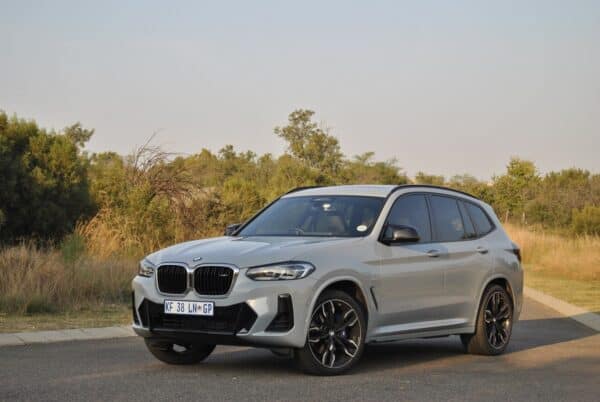 Even in M40i guise, the changes from the facelift, standard X3 take a keen eye to spot.

While performance focused SUVs have become the norm in place of the traditional sedan or hatch over the last few years, their existence has not been universally welcomed.

The argument remains; why produce a high-riding off-roader with some off-the-tar ability, but reduce that to almost nothing with on-road biased performance tyres and enough power to worry cars designed from the onset to be a no compromise driving machine?

Factor in the high ride height and wallow dynamics, the whole purpose of a go-fast SUV, on paper, warrants little merit compared to a traditional sports sedan or hatch capable of providing more thrills and driving pleasure.

By these virtues, the recently facelifted BMW X3 M40i shouldn’t exist. Like its tier up sibling, the X3 M Competition, the M40i is all about performance, but wrapped in a SUV body and serving as an alternative to the corresponding M340i.

While nothing new in principle, the presence of Munich’s much vaunted M badge on an SUV remains a bitter pill to swallow for many hardcore fans, especially as it now comes in four distinctive variations.

In the case of the X3, the M40i falls in the M Performance section that offers more power and underbody revisions, while being intertwined with the M Sport package that brings visual tweaks plus smaller adaptions underneath.

Combined, the configuration is too tantalising to avoid for those not wanting to be seen in a run-of-the-mill 20d or 30d, but unable to stretch their accounts to the Competition seeing as BMW doesn’t offer the conventional X3 M in South Africa.

As much as the “performance SUV debate” prevails with no end in sight as SUVs are what buyers want, the locally built X3 M40i is, therefore, a worthy consideration should the M340i not meet demands.

Having already amassed production numbers of 300 000 units since replacing the 3 Series at the Rosslyn Plant four years ago, the M40i’s recent arrival provided clarity to a number of questions left unanswered at the local unveiling last year.

As much as BMW continues to cop extensive flak for its recent designs, even more so after the reveals of the new 7 Series and the updated X7, the X3 has remained comparatively ordinary and even unassuming, even in M40i guise.

Including the alternations the X3, the M40i adds the blue M Sport brake calipers and the otherwise optional M Sport package to mix, along with a gloss black diffuser, black slats for the grille and a black lower air intake.

The subtlety, however, stops there as the optional Jet Black bi-colour 21-inch alloy wheels and Brooklyn Grey Metallic paint option hints at this being anything but a standard X3, even before attention shifts to the M badges, the M40i badge on the tailgate and air inlets integrated into the wheel arches.

Just as ordinary is the interior, which doesn’t get the new curved display, but rather the old live cockpit professional system made-up of the 12.3-inch digital instrument cluster and the 10.25-inch iDrive infotainment system with Apple CarPlay and Android Auto.

The biggest tell-tale of the X3 M40i age, the refreshed but still five-year old interior provides an enticing cocoon-like sensation, yet continues to make do with cheap plastics in some areas too reminiscent of BMWs of old.

It remains neatly presented though with the generous helping of silver and piano-key black inlays offsetting the grippy leather-wrapped M Sport steering wheel, stubby gear lever and the simple to fathom infotainment system controlled either by the screen or the easier rotary dial.

As an option, the X3 M40i gets a Heads-Up Display, the BMW M colours on the seatbelts, a decent sounding Harman Kardon sound system and the heated M Sport seats trimmed in Vernasca leather with contrasting blue stitching.

The change of suite from M Sport to M Performance has not been at the cost of practicality with more than enough legroom, headroom unaffected by the optional panoramic sunroof and a boot able to swallow between 550 and 1 660-litres of luggage.

Unsurprisingly, the X3 M40i, in every sense of the term, comes alive when you select Drive and unleash the fury of the uprated 3.0-litre turbocharged B58 straight-six engine.

Despite an initial bout of turbo-lag and kerb mass of 1 870 kg, the M40i is no slouch. Immediately out of the blocks, it feels responsive and glad to give into urgency, while at the same time assaulting those inside with a glorious straight-six soundtrack.

Switching from Comfort to Sport and then to Sport+ modes releases the X3 M40i’s brutal side. In the latter setting, the noise becomes otherworldly, the throttle more like stepping on a bomb and the acceleration downright violent and at the same time, thrillingly addictive.

A complete reversal from the launch where the former settings exhibited the opposite from their designations, the M40i grunt is well harnessed to all four corners by the eight-speed Steptronic gearbox.

Although geared with the sports ratio setup, it goes about its business effortlessly in “everyday” mode, but wakes-up with fast and kick-in-the-back shifts in the latter the modes.

As part of the X3 M40i transformation, BMW has made the M Sport differential and M variable steering standard, but not the M adaptive suspension that needs selecting from the options list.

The result is a firm ride that becomes naturally crashy on less well kept surfaces – but not spine shattering on the better variety – a sharp and confidence inspiring steering feel, but an all too familiar SUV body-roll when attempting to take corners with vigour.

Hiding behind the mentioned blue calipers, the M Sport brakes are razor sharp and despite being anything but focused on efficiency, the X3 M40i recorded a praiseworthy indicated best consumption of 9.9 L/100 km after its stay had ended.

As much as its existence goes against the blueprint of SUV representation, the BMW X3 M40i makes a convincing case as a proper fast SUV capable of settling down to a “normal” X3 for everyday use.

At R1 459 046 before options though, it is resoundingly expensive and for all its prowess, faces opposition not only from its traditional rivals, Mercedes-AMG (GLC 43) and Audi (SQ5), but within its own ranks in the shape of the xDrive30d as well as the top-selling xDrive20d.