For the love of speed

The two versions, made up of two distinctly outfitted models: The Tuono V4 1100 RR represents an exceptional thrilling machine and it is the true heir to the previous Aprilia V4 naked, acclaimed by critics as the most effective and fastest bike in its segment.

In addition to this model there is a version with exclusive equipment, Tuono V4 1100 Factory, dedicated to an extremely demanding public. This bike is equipped with components which are largely derived directly from the new Aprilia RSV4 RF superbike.

The V4 RR sells for R189 900 and the Factory for R219 900. Both include their Flexifin package of a free three-year service plan, two-year warranty, zero percent deposit, up to 72 months to pay, guaranteed trade-in facility, above book value, guaranteed buy back at 60% after three years and 24-hour roadside assist. All part of the Cayenne strategy of making motorcycles more affordable.

These new Aprilia Tuono’s are heirs to a family of motorcycles which have been voted over time as one of the most fun, adrenaline pumping and efficient units ever, achieving absolute performance levels and sophistication. But now these motorcycles are also more comfortable, safe and fun to ride on the road. In addition to receiving many of the important upgrades which were just introduced on the new RSV4, Aprilia Tuono V4 1100 RR and Tuono V4 1100 Factory also add a new look, thanks to the more protective top fairing and the better aerodynamic penetration coefficient.

The relative headlight unit changes as well – a whole 1.5kg lighter – fitted with an LED technology parking light and a more modern shape, which better integrates with the overall design of the motorcycle without betraying the typical language of the Aprilia V4 characterised by three headlights. Tuono V4 1100 Factory stands out for its new rail fairing, derived from the RSV4’s – a true benchmark in sport motorcycle design. 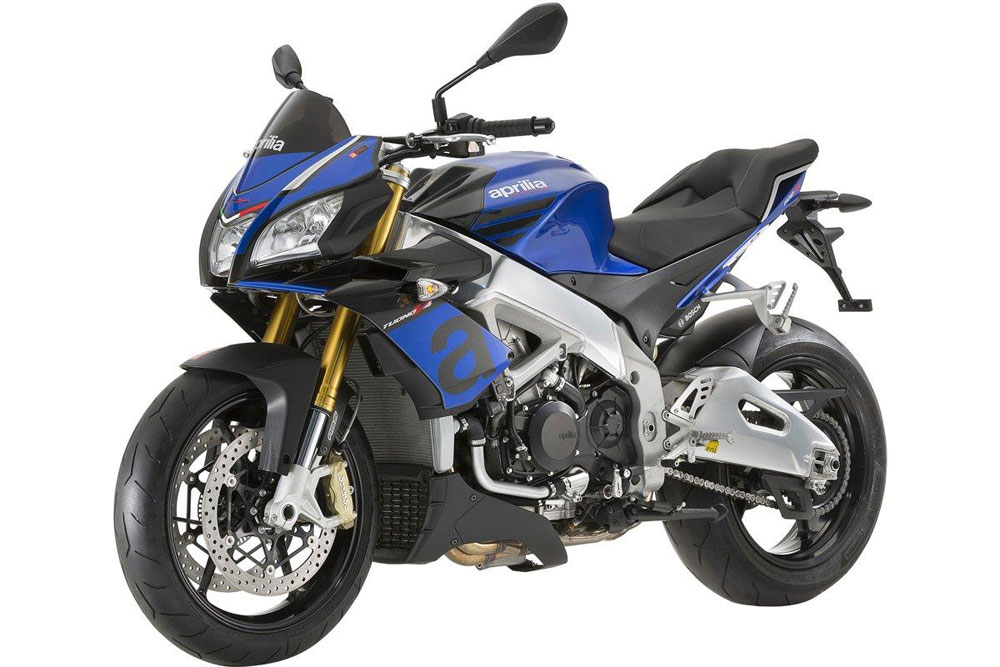 The saddle has been made more comfortable, even with respect to its fairing-clad sister, thanks to the new foam production procedure which prevents the crystallisation phenomenon – and therefore the hardening – of the foam itself. You can still naturally ride two-up by mounting the dedicated saddle portion. Thanks to the 15mm lower seating position and the new, narrower handlebar, the on-board ergonomics of both the Tuono V4 1100 versions change, becoming decidedly more comfortable.

There is no other naked bike as sporty and effective as the Tuono V4 1100’s. Its close derivation from the seven times World SBK champion is clear when you look at the beautiful double rail frame made from pressed and cast brushed aluminum elements – a structure that boasts unrivalled balance between torsional stiffness and flexibility – the new 65° V4 engine is set inside it in all of its purity and uniqueness.

In order to make the Tuono V4 1100 more agile on the road, without losing its legendary fierceness on the track, the headstock angle was changed from 25.1° to 24.7° and the trail went from 107.4mm to 99.7mm. These sleeker chassis dimensions combine with the six millimetre longer aluminum swingarm, the various suspension setups and the consequent adjustment of the electronic controls, including the wheelie control feature, to obtain a rock solid chassis at high speeds but more agile in direction changes.

Tuono V4 1100 RR is fitted with a high quality suspension, the upside-down Sachs forks with 43mm stanchions has separate “one by one” hydraulic adjustments incompression and rebound, as well as spring preload adjustment on both stanchions.

The new standard calibration on both units is functional to the increased performance of the V4 engine and the revamped chassis dimensions also take into consideration the use of the motorcycle on the road.