British racing driver Sean Edwards was killed in a fiery car crash at the Queensland Raceway at Willowbank, Australia on Tuesday. Edwards, 26, was believed to have been sitting in the passenger seat of the vehicle when it crashed into a wall and burst into flames, the Brisbane Times reported.

Currently leading the Porsche Supercup series that follows the formula one calender, Edwards was involved in the filming of FormulaOne racing movie Rush, where he played the role of his father Guy Edwards. Edwards tweeted this photo from the set of Rush: “I’m playing my dad Guy Edwards today, how cool is that?! Got his car, suit and helmet on! Penthouse RIZLA sponsors 🙂 “

The driver was believed to have been on a working holiday in Queensland ahead of the racing at Abu Dhabi in November. He shot to European fame this year by winning the Nurburgring 24-hour race in a Mercedes-Benz shared with Bernd Schneider, Jeroen Bleekemolen and Nicki Thiim.

On Monday he posted on Twitter: “Time to hit Queensland Raceway today, should be fun, hope there aren’t too many kangaroos like at Bathurst!”

A police spokeswoman said the deceased man was an experienced racing driver. 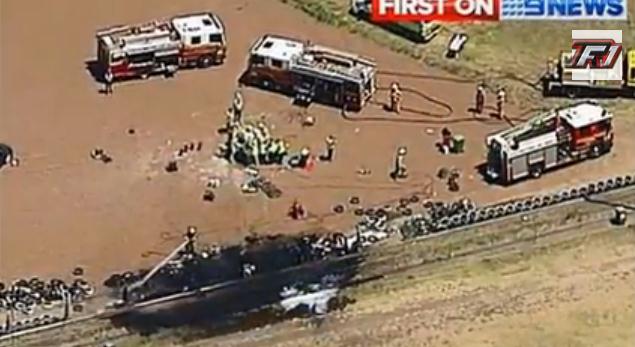 The driver of the car, a 20-year-old man, is at the Royal Brisbane and Women’s Hospital in a critical condition after suffering severe burns, organ damage and broken bones.

It took emergency services more than two hours to free him from the wreckage and airlift him to hospital.