Centre console has been updated to accommodate a new touchscreen display Exactly three weeks after turning up on a Middle East website wearing relatively little layers of disguise, Nissan has officially debuted the extensively updated Patrol due to go on sale in its biggest market later this month.

Representing the biggest change since its first subtle mid-life revision two years ago, the now nine-year old Y62 Patrol comes with a completely redesigned nose consisting out of restyled headlights with integrated boomerang shaped daytime running LEDs, a new V-motion grille, front fenders that now cuts into the light clusters, wider air intakes on the flanks of the front bumper and revised taillights with sequential indictors. 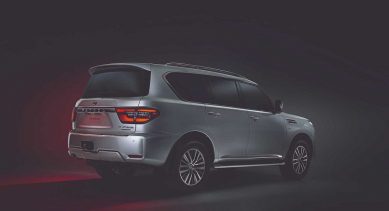 Just as big a departure is the interior where the centre console has been updated to accommodate a new touchscreen display for the audio system, surrounded by a number of buttons for the climate control, while the top mounted infotainment system now comes with Apple CarPlay and Android Auto. 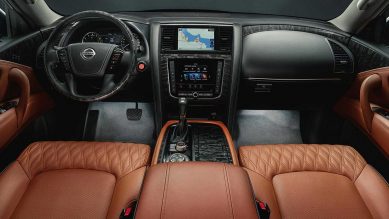 Up front, the Middle East-spec Patrol will come with two petrol engine options carried over from the pre-facelift example; a 4.0-litre V6 producing 206kW/394Nm and the familiar 5.6-litre V8 that delivers 298kW/560Nm. As before, both are paired to a seven-speed automatic gearbox with the latter receiving Nissan’s Hydraulic Body Motion Control suspension as standard.

As indicated, sales of the Patrol will start in Middle Eastern markets at the end of this, but expect local availability to only commence next year with only the V8 set to be offered once again.