Dispenses with the conservative design of the outgoing model in favour of a more radical look derived from the Venue and Palisade. Set to be arriving in South Africa later this year, Hyundai has unveiled at the all-new Creta at the Delhi Auto Expo in India.

Going on sale in that market next month, the Creta is essentially is a development of the ix25 sold in China, and dispenses with the conservative design of the outgoing model in favour of a more radical look derived from the Venue and the North American Palisade.

Featuring its sibling’s split headlight design but with a different take on the cascading grille, a silver C-pillar and 17-inch diamond-cut alloy wheels, the rear-end boasts a more rounded design and comes resplendent with unique LED taillights, a bootlid integrated spoiler, convex window and faux vents inserted into the rear skidplate.

Not revealed though are the Creta’s dimensions relative to those of its predecessor’s, or indeed its interior, which is likely to be based on that of the ix25 and incorporate a cleaner and minimalist design, complete with improved materials, a new digital instrument cluster and gear lever, revised steering wheel and, on top-end models, the new 10.25-inch touchscreen infotainment system. 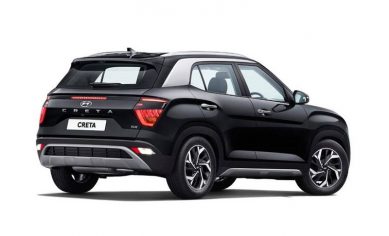 According to reports, the Creta will share its line-up of engines of the Kia Seltos which, in India, consists of a normally aspirated 1.5-litre petrol that produces 85 kW, the 103 kW 1.4 T-GDI and an 85 kW 1.5-litre turbodiesel.

As before, the Creta will be front-wheel-drive only and come with three transmission options; a six-speed manual that will be standard across the range and the only option for the diesel, an optional CVT on the free-breathing petrol and a seven-speed dual-clutch on the 1.4 T-GDI.

As mentioned, sales of the Creta will commence in March with pricing anticipated to start from around Rs 1 000 000 or R208 389, but expect local prices to be higher and on par with that of the Seltos which kicks-off at R353 995.