Twin-turbocharged 3.5 EcoBoost V6 engine has been recalibrated that has resulted in a power hike from 482 kW to 492 kW. Five years after making its much reported return at the North American International Auto Show in Detroit, Ford has surprisingly revealed the updated GT at the Chicago Auto Show.

While the exterior tweaks is limited to the rear buttress that have been redesigned to improve air flow by a claimed 50%, the majority of the revisions are underneath the GT’s skin in the form of larger intercoolers, retuned suspension damping in Track mode and an Akrapovic  titanium exhaust system that saves four kilograms over the previous outlet. 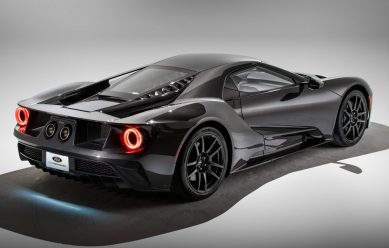 Residing in the middle, the twin-turbocharged 3.5 EcoBoost V6 engine has been recalibrated with so-called gallery cooled pistons and higher energy ignition coils that has resulted in a power hike from 482 kW to 492 kW.  As before, drive is routed to the rear wheels via a seven-speed dual-clutch gearbox. No performance figures were revealed.

Aside from the standard model, Ford has also introduced to special editions in the shape of the Liquid Carbon and the 24 Hours of Le Mans winning Gulf Racing Commemorative edition. 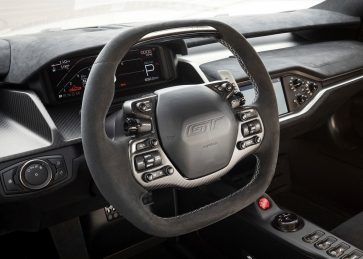 As its name suggests, the former comes finished in bare carbon fibre and further receives carbon fibre wheels, a choice of five colours for the interior and brake calipers, a six-point racing harness with anchor points and titanium lugnuts. Options consist out of the dual racing stripes, standard colour palette mirror caps and a single stripe.

Long part of the GT programme, the updated Gulf edition retains the iconic orange-and-blue Gulf livery resplendent on the 1968-1969 Le Mans winning GT40, albeit with optional carbon fibre wheels and a number switch from 9 to 6 as a tribute to chassis 1075 that took back-to-back victories in the French endurance classic.