Image sees the Strada being heavily influenced by the next step-up Toro in both profile and design. Fiat has released the first official teaser image of what is believed to be the replacement for the terminally aged Strada pick-up in South America.

The current top-selling pick-up in Brazil in spite of having debuted in 1996 with a raft of specification, safety and aesthetic upgrades having been introduced over the last few years, the single image sees the Strada being heavily influenced by the next step-up Toro (red) in both profile and design.

According to motor1.com Brazil, the biggest change to the Strada, apart from its new exterior, will be its platform that will be shared with the Argo hatchback as opposed to the current Palio-based model. 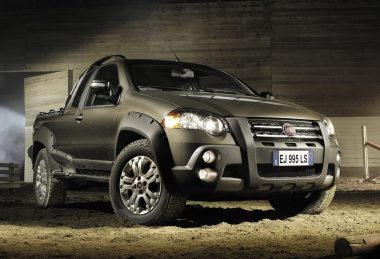 In addition, the interior will take styling cues from the entry-level Mobi in an attempt to reduce costs. As per the image, the Strada will be offered as a double cab, although the traditional single cab will be carried over. Unlikely though is the chance of it being specified with four-wheel-drive as the Argo platform does not support an all-paw gripping system.

Up front, the Argo touches will spill over to the engine choices, which could include the 80kW/139Nm 1.3-litre Firefly and possibly the bigger 1.8-litre E.torQ Evo that punches out 104kW/189Nm. Expected to continue is the 1.4-litre Fire that delivers up to 66 kW, with an interesting option that could be included coming in the form of the Firefly turbo that produces 88kW/190Nm in case of the 1.0-litre three-cylinder, up from the normally aspirated unit’s 57kW/107Nm, and the flagship 1.3 that punches out 110kW/270Nm. Not featuring is a diesel drivetrain due to the various engines being adapted to run on ethanol.

As with the current model, the Strada will at first be available only with a five-speed manual gearbox, although later on, it will be offered with Fiat’s five-speed automated manual dubbed Gear Smart Ride or, in the case of the 1.8, a traditional six-speed torque converter automatic. Expected to debut in Brazil later this year with sales set to commence soon after, the Strada, for now, is not expected to return to South Africa as a rival for the first generation Dacia/Renault Logan-based Nissan NP200.