North American Toyota Supra gets power hike, no word on South Africa yet

Tweaks has resulted in power increasing from 250 kW to 285 kW with torque remaining unchanged at 500 Nm. Toyota has introduced a power upgrade for the Supra in North America in addition to launching the new 2.0-litre four-cylinder engine.

Effectively the same revisions as what BMW Australia applied to the Z4 M40i in December last year, the inclusion of new pistons with a reduced compression ratio and a dual-branch exhaust system with six outputs instead of two has resulted in power from the 3.0-litre turbocharged straight-six increasing from 250 kW to 285 kW with torque remaining unchanged at 500 Nm.

Still hooked to the eight-speed sport Steptronic gearbox, the Supra is now marginally faster with 0-60 mph (96 km/h) taking 3.9 seconds as opposed to 4.1 seconds, while the top speed remains pegged at 250 km/h. 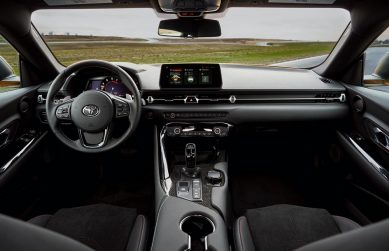 In addition to the engine, Toyota has tweaked the Supra’s dynamics with the inclusion of a recalibrated electric power steering system, reprogrammed Vehicle Stability Control and Adaptive Variable Suspension, as well as aluminium strut tower braces and retuned front and rear dampers.

Along with the upgrades, a limited edition A91 has been revealed based on the flagship 3.0 Premium with added features such as red Brembo brake calipers, a black carbon fibre lip spoiler and carbon mirror caps, matte black alloy wheels, a black leather/Alcantara leather interior with blue stitching and two new colours; Refraction and Nocturnal.

While the A91 and the aforementioned 2.0-litre are not expected to arrive in South Africa at present, reports are that the powered-up 3.0-litre could be introduced, although no mention from Toyota has yet been made.