Cupra has reserved its most powerful take for the Leon Sportstourer that pumps out 228kW/400Nm. Once the performance denominator of Volkswagen’s Seat division until being spun into a brand of its own accord two years ago, Cupra, this past week, took the covers off of the hot Leon that will make its public debut at the Geneva Motor Show next month.

Based on the fourth generation of Seat’s version of the new Volkswagen Golf that will be offered as a hatch or Sportstourer estate, Cupra’s unique fixtures, outwardly, comes in the form of a new grille and larger air vents on the flanks of the bumper, body coloured mirrors, copper or diamond 18-inch alloy wheels with 19-inches optional, dual exhaust outlets with a quad setup on higher-end models, wider side skirts, a choice of six alloy wheel designs and six colours; Candy White, Midnight Black, Urban Silver, Magnetic Tech, Graphene Grey, Desire Red and two matt hues; Magnetic Tech Matt and Petrol Blue Matt. 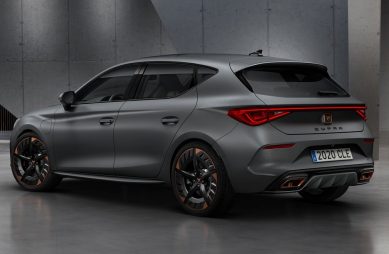 While similar in appearance to the Golf and the standard Leon, Cupra has also gone about the interior by equipping it with the 10.25-inch Seat Digital instrument cluster and ten-inch touchscreen infotainment system, sport bucket seats, dark chrome and copper inserts, illuminated Cupra branded door sills, brushed dark aluminium inlays on the doors and a wraparound ambient lighting system.

Sitting 25 mm closer to the ground than its sibling, the Cupra Leon has been extensively revised underneath its skin with retuned dampers and springs, a MacPherson strut front suspension and multi-link rear layout featuring, along with the same Dynamic Chassis Control system as the new Golf GTI that comes with four modes; Comfort, Sport, Cupra and Individual. 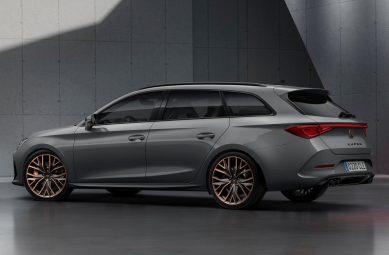 In a first for Cupra though, the Leon will be offered in a choice of four models with one being a plug-in hybrid. In conventional guise, the Leon comes powered by a 2.0 TSI that develops the same 180kW/370Nm as the GTI, or with 221kW/400Nm that could in fact be the same output as the still-to-be-seen Golf TCR. Somewhat surprisingly, Cupra has reserved its most powerful take for the Leon Sportstourer that pumps out 228kW/400Nm, which is transmitted to all four wheels using a version of Volkswagen’s 4Motion system dubbed 4Drive.

Despite not revealing performance figures across the range, Cupra has indicated that the all-gripping Sportstourer will go from 0-100 km/h in five seconds and hit the electronic speed buffers at 250 km/h. Like the rest of the range though, the fast estate comes fitted as standard with the XDS electronic front differential and the seven-speed DSG transmission. 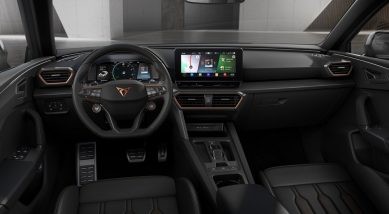 In the case of the hybrid, known as the eHybrid, Cupra has opted for the same drivetrain as the Golf GTE that marries a 1.4 TSI engine with a 13.1 kW lithium-ion battery pack for a combined system output of 180kW/400Nm. Offering an all-electric range of 60 km with charging time falling from six hours to 3.5 hours using a more powerful Wallbox unit, the eHybrid sends its amount of twist to the front wheels via a six-speed DSG.

Going on sale across Europe during the final quarter of this year, the Cupra Leon will sadly remain forbidden fruit for South Africans following Seat’s departure from the market over a decade ago.