i20 N will reportedly be powered by an uprated version of the standard 1.6 T-GDI engine, rumoured to produce 150 kW. The third model after the Veloster and i30 to receive the performance N moniker, Hyundai has released the first official teaser video and images of the new i20 N. 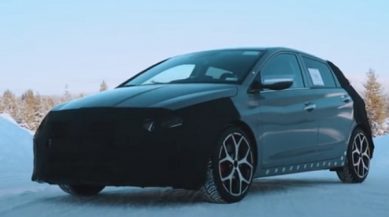 Aimed at the likes of the Ford Fiesta ST, the four-wheel-drive Toyota GR Yaris and Volkswagen Polo GTI, the i20 N will reportedly be powered by an uprated version of the standard 1.6 T-GDI engine, rumoured to produce 150 kW which will be send to the front wheels. Like its siblings it will feature a six-speed manual gearbox or a new seven-speed dual-clutch automatic.

In addition to the i20 N, the video also shows Neuville piloting the i20 he campaigns in the WRC, as well as the Veloster-based RM19 research vehicle that uses a mid-mounted, 287 kW version of the i30 N’s 2.0-litre turbo engine.

With more details likely to emerge in the coming weeks and months, reports are that the i20 N will make its world debut either towards the end of this year or in early 2021.