Already offered with four-wheel-drive with or without a roof, Lamborghini has now taken the former off of the two-wheel-drive Huracan EVO in creating the Rear-Wheel-Drive Spyder.

Differing from its coupe sibling launched back in January by virtue of losing the roof for a folding soft-top that can be opened and closed in 17 seconds at speeds up to 50 km/h, the two-wheel-drive Spyder receives the same subtle cosmetic tweaks, plus a gloss black rear bumper with an integrated diffuser not found on any another Huracan model. 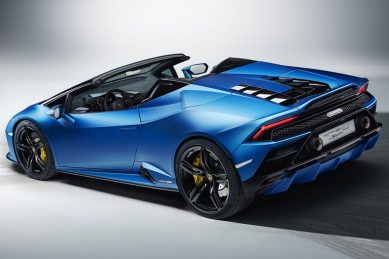 Tipping the scales at 1 509 kg, 33 kg less than the four-wheel-drive Spyder but 120 kg more than the coupe, the RWD Spyder rides on 19-inch Kari alloy wheels wrapped in Pirelli PZero rubber and while fitted as standard with cross-drilled ventilated steel brakes, can be specified with optional carbon ceramic stoppers as well as 20-inch alloys.

Boasting the now familiar ANIMA drive mode selector with three modes; Strada, Sport and Corsa, as well as retuned Performance Traction Control System and Lamborghini Dynamic Steering, the Spyder also keeps the normally aspirated 5.2-litre V10 as is with outputs of 449kW/560Nm. Mated to a seven-speed dual-clutch gearbox, the RWD Spyder will get from 0-100 km/h in 3.5 seconds and top out at 324 km/h.