Koleos goes without the plethora of new safety and driver assistance systems, as well as the new Blue dCi turbodiesel engines. A year after making its world debut in Europe, Renault has announced pricing details of the updated Koleos. The recipient of a specification upgrade, somewhat bizarrely mere days after the facelifted bowed on the Old Continent, the South Korean built Koleos now falls in-line with the relative exterior revisions, namely a tweaked grille and front bumper, chrome detailing, new 18-inch alloy wheels and an updated rear facia made up of a larger third brake light, chrome dual exhaust outlets and a slightly higher positioned skidplate.

Inside, similarly small updates have taken place in the form of the USB port being relocated to underneath the facia, the materials upgraded with top-stitching on the front armrest in models equipped with leather upholstery and a satin chrome finish featuring on the gear lever, around the air vents and on the steering wheel. Also added are heated and cooled front cupholders and seats with longer cushions. 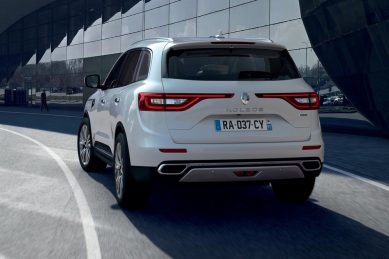 Still offered in two trim levels; Expression and Dynamique, the former is outfitted with a seven-inch touchscreen R-Link2 infotainment system, while the latter comes with the tablet-style 8.7-inch display. Integrated on both though are Bluetooth, Voice Recognition, Apple CarPlay and Android Auto.

Unlike in Europe, the Koleos goes without the plethora of new safety and driver assistance systems, as well as the new Blue dCi turbodiesel engines as the normally aspirated 2.5-litre petrol engine has been retained. Still outputting 126kW/233Nm, the four-pot is paired to a CVT with drive going to the front wheels or all four in the case of the Dynamique. Claimed fuel consumption is 8.1 L/100 km for the former and 8.3 L/100 km for the latter. 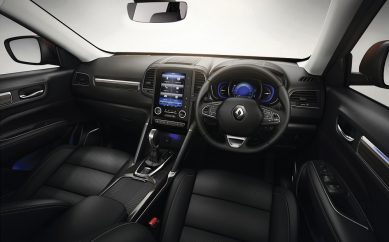