Frontier's chassis will be the same H60B design as that of the X-Class, whereas that of the Navara and Alaskan carries the code H60A. Despite Mercedes-Benz’s quiet axing of the X-Class some two months ago without any fanfare, a report from Argentina has alleged that some of its chassis components will be kept for the North American market twin of the Nissan Navara, the new Frontier.

On course to debut either this next year or in 2022, the already spotted Frontier, which will finally move to the same D23 platform as its sibling after sticking with the D40 for nearly two decades, will retain the X-Class’ cross member and various reinforcements never incorporated into the Navara or the Renault Alaskan. In publishing the claims, Autoblog Argentina reports that the chassis will be the same H60B design as that of the X-Class, whereas that of the Navara and Alaskan carries the internal code H60A. Even more curious is the use of four codes for the chassis itself, Euro 5 4×2 and 4×4, plus Euro 6 4×2 and 4×4, which, for the time being, remains open to speculation and interpretation.

Whereas production of the Navara and X-Class took place in Spain, a plant that will soon close, the Frontier, for Argentina at least, will be made alongside the Alaskan at Renault’s Santa Isabel Plant outside Cordoba and offer the D40’s current 3.8-litre V6 petrol engine instead of the Navara’s single and twin-turbo 2.3-litre diesel. 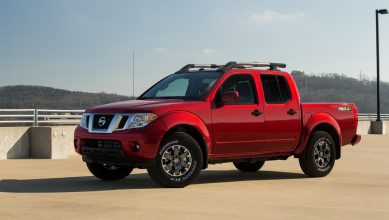 Despite the Frontier being brand-new, the Navara will receive a series of updates before an all-new model touches down in 2022, so it remains to be seen whether the X-Class components would be carried over when production starts at the Rosslyn Plant in Pretoria next year.