This is it: Nissan Z Proto finally revealed as preview of next generation Z-car

Packing a twin-turbocharged V6, the production Z is poised to produce more power than the Toyota Supra With eleven years having passed since the introduction of the 370Z, Nissan, after numerous teaser images and speculative reports dating back nearly twelve months, officially unveiled the Z Proto in the early hours of Wednesday morning (16 September).

As indicated by its name, Yokohama’s revived sports coupe provides a hint of what to expect from the actual model, rumoured to be called the 400Z, with the automaker nonetheless remaining tight lipped on when it will enter production.

Sporting a retro design inspired by the original Datsun 240Z and the immortal Z32 generation 300ZX as mentioned back in January, the Proto boasts small teardrop-shaped headlights with outer rim LEDs, a rectangular lower grille taken from the 370Z, a large rear window and a pronounced rear bumper lip plus LED taillights reminiscent of those used on the mentioned 300ZX. 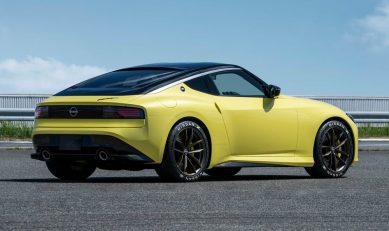 Riding on 19-inch alloy wheels and further incorporating flared door sills and dual exhaust outlets, the Proto’s interior represents a quantum leap over that of the dated 370Z, by featuring a bang-up-to-date design in the guise of a 12.3-inch digital instrument cluster, an expansive touchscreen infotainment system seemingly taken from the new X-Trail, a new steering wheel with piano key black inlays and yellow finishes on the seats as per the exterior colour.

Measuring 4 382 mm in overall length with a height of 1 311 mm and width of 1 849 mm, the Proto is both five millimetres shorter and wider than the 370Z, but 50 mm longer overall and as indicated by the most recent teaser, equipped with a six-speed manual gearbox plus a traditional handbrake. Carried over from the 370Z are the three auxiliary gauges on top of the dashboard, as well as a new 12 o’clock marking on said steering wheel.

Up front, and as per previous claims, the Proto marks the Z’s return to forced induction for the first time since the Z32 300ZX twenty years ago, with Nissan merely stating that a twin-turbocharged V6 resides underneath the bonnet. It is however expected to be the same 3.0-litre VR30DDT unit that does duty in the Infiniti Q60 Red Sport, meaning an output of 298kW/475Nm to go with the 400Z name which now denotes power output in PS instead of engine displacement. 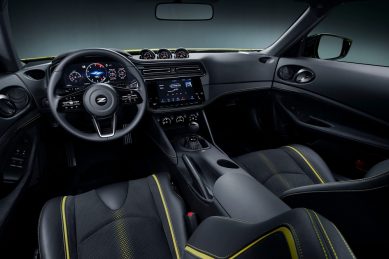 Although Nissan has confirmed that an automatic gearbox would be offered, rumoured to be a revised version of the 370Z’s seven-speed unit, Z –car Chief Product Specialist, Hiroshi Tamura, confirmed to carsguide.com.au that the retention of the manual came as the biggest factor due to it accounting for 35% of all 370Z sales. He however stated that consideration is being given for a convertible despite it having featured on the 300ZX, the 350Z and the 370Z. A Nismo version has also not been ruled out.

Based on current reports, the Z Proto is expected to enter production next year as part of an expansive new or revised model roll-out detailed in a teaser clip back in May. More details are set to emerge in the coming weeks and months.

Palisade: Most expensive Hyundai worth its R1m price tag?
1 day ago
1 day ago

Palisade: Most expensive Hyundai worth its R1m price tag?
1 day ago
1 day ago