AA concerned over poor test results after latest round of crash tests. 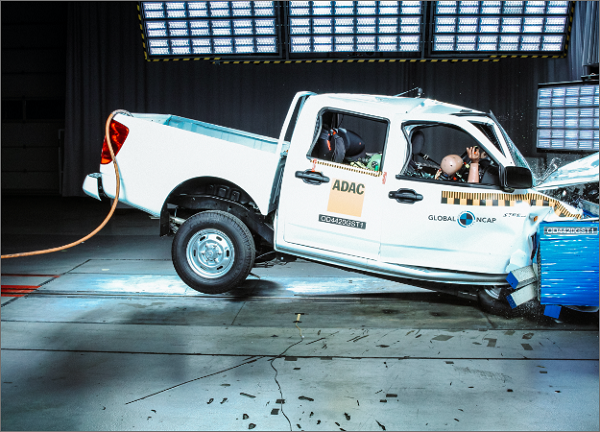 Great Wall Steed 5 at the point of impact

The Automobile Association of South Africa (AA) has expressed its concerns over the poor levels of adult and child protection indicated by the test results from its latest round of crash tests.

The AA is particularly alarmed by the Steed’s results which it says “demonstrated a high probability of life threatening injury”. The Steed was the second bakkie tested by Safer Cars for Africa, following the Nissan NP300 Hardbody double cab, which competes with the GWM on price and incidentally also scored a zero-rating back in 2018. The Hardbody scored two stars for child safety.

The Steed 5 that was used for the crash test was a base model that is sold without airbags. The test readings from the driver dummy showed a red head and brown chest and neck, which translates into poor protection for head and weak protection for neck and chest, which are regarded as critical body regions.

According to Global NCAP’s results, the Steed’s structure and footwell area were deemed unstable. The AA also questions whether an airbag would have prevented serious injury to the driver taken into consideration the deformation in the passenger compartment and movement of the steering column.

Zero points were awarded for the child occupant dynamic assessment score as the manufacturer decided against recommending a Child Restraint System (CRS) for the test. The three-year-old dummy CRS broke during the impact due to the poor performance of the restrain system. The Steed 5 does not have ISOFIX anchorages for the child seats in the rear and lacks three-point belts in all seating positions. 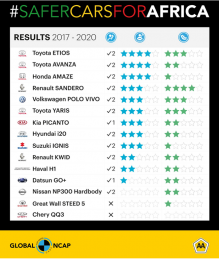 The AA says child occupant protection was negatively affected by the manufacturer’s refusal to indicate a CRS for use in the test bringing dynamic points to zero. The CRS selected by Global NCAP used the ISOFIX anchorages available in the car. Both child dummies heads contacted the car during the test threatening the safety of the child occupants. Lack of proper ISOFIX markings and the lack of a passenger airbag disabling switch resulted in a two-star child occupant protection rating for the H1.

The test results also indicate that the child occupant protection was poor performance as the head contacted the interior of the car. The lack of three-point belts in all seating positions and lack of ISOFIX anchorages contribute to the two-star rating for child occupant protection. The latest version of the South African-specced Kwid comes standard with two airbags. A Kwid did manage to score a three-star rating in Latin NCAP test last year, but that model included side body airbags.

The cars selected by Safer Cars for Africa are all base models bought off local showroom floors before being shipped to a lab in Germany for testing. They are driven into a collapsible aluminium honeycomb barrier head on at an offset of 40% at a speed of 64 km/h. All the vehicles are occupied by two average-sized adults crash test dummies in front and two child dummies in the rear, reflecting children of the ages of three and one and a half.

Since its inception in 2017, Safer Cars for Africa has tested 15 cars. The Toyota Etios, Toyota Avanza and Honda Amaze have all achieved a four-star rating. Apart from the Hardbody and Steed 5, the only other vehicle failing to score any stars was the Chery QQ3.