Styled more along the lines of the Patrol's twin, the Armada, the Frontier ditches the twin-turbodiesel engine for a petrol V6. 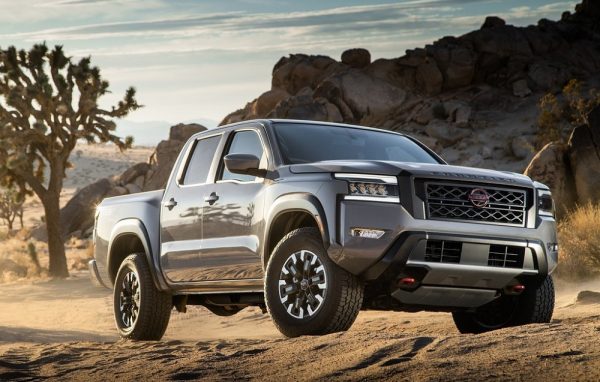 With the wraps having come off of the facelift Navara last year, Nissan North America officially revealed its Americanised cousin, the all-new Frontier, overnight as the replacement for the almost 17 year old D40 model that remained in production well after the introduction of the current D23.

Spied on a number of occasions last year undergoing testing, the Frontier shares the Navara’s basic silhouette, but drops the rounded appearance for a flatter and more aggressive looking Titan inspired grille and the headlights for so-called interlocking LED headlights derived from but not mirroring completely those of the Armada, while also receiving a more pronounced shoulder line and a model bespoke bonnet.

Said to take inspiration from the North American D21 Hardbody that differed completely from the model sold in South Africa in the early 1990s, the Frontier’s rear facia has more in common with that of its sibling in that the bumper, tailgate, sans the Frontier badging, tailgate handle and even the position of the Nissan logo are the same as those of the Navara, with the only difference being the design of the light clusters. 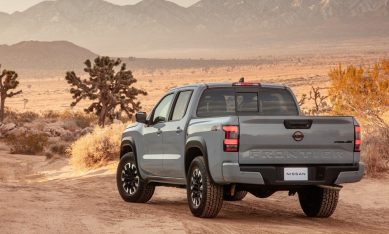 Unveiled in off-road focused Pro-4X guise, which adds red tow hooks, Bilstein shock absorbers, an underbody skidplate, electronic locking rear differential, around view monitor and revised front and rear suspension, the Frontier measures 5 339 mm overall in King Cab guise and 5 692 mm in Crew Cab form, with the wheelbase coming in at 3 200 mm and 3 550 mm respectively. The overall width, regardless of the bodystyle, is 1 854 mm with Nissan claiming a payload of 730 kg and braked trailer towing capacity of 3 048 kg.

The biggest departure from not only the D40 but also the Navara is the Frontier’s interior, which is completely different in look and design in that it adopts a flatter centre facia housing an all-new eight or optional nine-inch touchscreen infotainment system with Apple CarPlay and Android Auto.

Apart from the display, the Frontier gets the same steering wheel as the Armada/Patrol rather than the Navara’s D-shaped item, a seven-inch TFT instrument cluster display, less buttons and dials for the climate control, relocation of the four-wheel-drive dial from the base of the facia to the side, a new gear lever on the equally new transmission tunnel, an old-style footbrake rather than a conventional handbrake and grab handles on either side of the console. 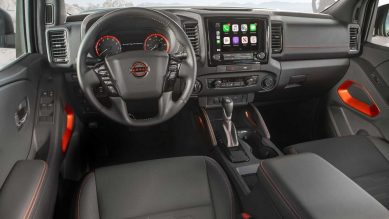 As speculated with the arrival of the facelift D40 at the beginning of last year, the Frontier carries over the normally aspirated 3.8-litre V6 petrol engine, whose 231kW/381Nm is delivered to the rear or all four wheels via a nine-speed automatic gearbox. As well as the engine, the Frontier boasts a new steering mechanism, cab mounts said to reduce vibrations by 80%, larger front and rear stabiliser bars, Hill Descent Control on four-wheel-drive models and suspension components, as previously indicated, from the now discontinued Mercedes-Benz X-Class.

Going on sale in the North American summer, the Frontier will be offered in a choice of nine colours; Glacier White, Super Black, Gun Metallic, Baja Storm, Red Alert, Tactical Green Metallic, Boulder Grey Pearl, Deep Blue Pearl and Cardinal Red Metallic TriCoat with speculative pricing from around $30 000 (R450 121). With local assembly of the Navara due to start later this year, don’t expect much of the Frontier to be incorporated into the final design.