At present, and like the standard Clubsport, the Clubsport 45 appears unlikely for local market introduction.

Poised to reveal the long rumoured 245 kW Golf R Plus later this year, Volkswagen has detailed yet another special edition version of the GTI in celebration of the iconic designation’s 45th anniversary this year.

In a move not too dissimilar to the GTI 35 Edition based on the mark VI, the Clubsport 45 rates as an aesthetically enhanced version of the model revealed last year as the replacement for the Mk 7.5 TCR. On the outside, the Clubsport 45 boasts:

Fitted as standard with the otherwise optional Matrix LED headlights, the Clubsport 45’s unique interior touches consists of GTI branded sport seats and a 45 badge as well as a gloss black insert on the multi-function sport steering wheel.

Unchanged is the 45’s chassis and dynamics, including the 2.0 TSI engine, which once again produces 221kW/400Nm. Hooked to a toggle switch activated seven-speed DSG, the 45 will get from 0-100 km/h in less than six seconds and top out at 250 km/h. 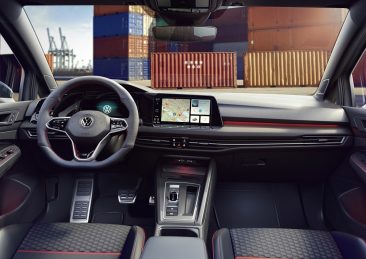 In Germany, pricing kicks off at €47 790 (R866 247), but with Volkswagen not expected to bring the standard Clubsport to South Africa when it debuts the local market GTI later this year, don’t therefore expect the 45 to be available anytime soon.