Taigo is expected to fill the gap between the T-Cross and T-Roc in Volkswagen's crossover/SUV line-up when it arrives. 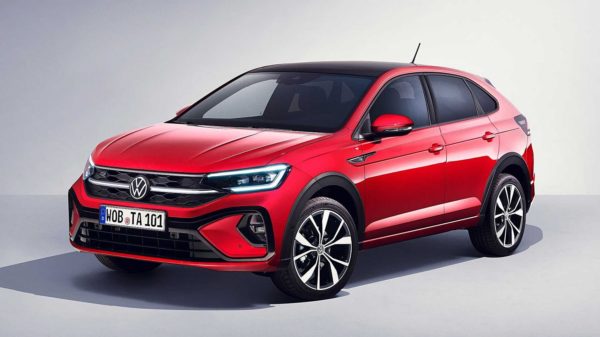 Exterior almost identical to that of the Taigo's South American Nivus cousin.

Teased in sketch form back in March, Volkswagen has taken the wraps off of the new compact Taigo crossover South Africa will be getting next year.

Sporting a coupe bodystyle and riding on the same MQB A0 platform as the Polo, T-Cross, Skoda Fabia and Seat Ibiza, the Taigo merely rates as a Europeanised version of the South American Volkswagen Nivus that debuted last year.

Confirmed to be built at Wolfsburg’s Pamplona plant in Spain rather than at the São Bernardo do Campo Plant in São Paulo, Brazil, the Taigo measures 4 266 mm in overall length with the wheelbase rated at 2 566 mm, the width at 1 757 mm and the height at 1 494 mm.

Despite the dimensions being the same as that of the Nivus, the Taigo, somewhat oddly, has a more capacious boot that can swallow 438-litres of luggage with the rear seats up compared to its cousin’s 415-litres, but down on the 455-litres offered by the T-Cross.

Inside, and sans the fitting of the more upmarket climate control panel from the T-Cross and indeed the facelifted Polo, the Taigo’s cabin is otherwise identical to that of the Nivus as well with buyers having a choice of either the 6.5-inch Composition Media infotainment system or the optional 9.2-inch Discover Media that, admittedly, replaces the larger 10-inch display offered in Brazil.

In addition to the mentioned climate control, the Taigo can be equipped with a wireless smartphone charger, the 10.25-inch Active Info Display instrument cluster and on the outside, the light and sight package as well as up to 18-inch alloy wheels. As shown, the Taigo will also be privy to the popular R-Line styling package.

Despite not detailing anything about the Taigo’s dynamics, Volkswagen did confirmed powertrain details in the shape of two non-hybrid TSI mills shared with the Polo, Ibiza, Fabia and T-Cross; the 1.0-litre three-cylinder in two states of tune; 70 kW and 81 kW and the 1.5-litre four-cylinder that delivers 110 kW.

Standard transmission choices comprise a five-speed manual on the 70 kW 1.0 TSI with the 81 kW unit offering either a six-speed manual or a seven-speed DSG, the latter being the sole option for the 1.5 TSI. Like the Nivus and the T-Cross, drive in the Taigo is routed to the front wheels only.

As mentioned, the Taigo has been given the thumbs-up for South Africa from next year with pricing set to kick-off from around R350 000.