EQG represents one of the biggest transformations in the iconic G-Class' 42-year production run. 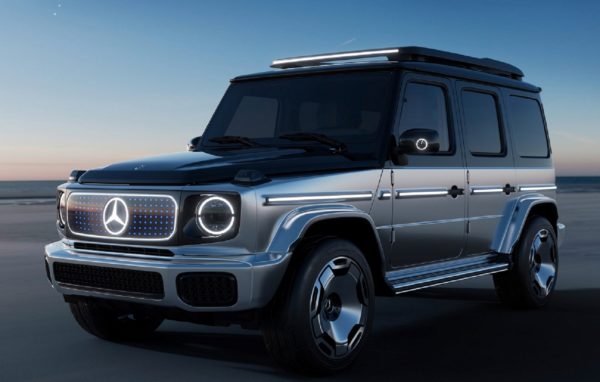 Transformation from G-Class to EQG small but extensive.

Named in a patent document earlier this year after the emergence of rumours two years ago, Mercedes-Benz officially revealed the all-electric G-Class, known as the EQG, at the IAA in Munich in the early hours of Monday morning.

Although billed as a concept as the actual production variant is due to be released either towards the end of this year or in 2022, the EQG has, unsurprisingly, been toned down little from the standard G-Class in spite of the mentioned changes being prominent outside.

Retaining the silhouette as well as the iconic “G-Wagen” look, the EQG, which rides on 22-inch chrome GLS-style mono-block alloy wheels, boasts a sealed-off black grille panel with not only an illuminated three-pointed star, but also squircle “studs” dotted around the badge itself with blue LED backlighting as per Benz’s EQ division.

Aside from the two-tone gloss black and gloss aluminium body colour, the EQG also comes with what Mercedes-Benz calls aerodynamically enhanced front and bumpers, a gloss black roof rack with integrated LED strips and aluminium side steps with top illumination.

In the biggest exterior departure from the G-Class though, the EQG features a squircle shaped spare wheel cover containing the various charging cables and acting as a storage box rather than containing a full-size 22-inch spare.

Still based on a body-on-frame chassis like its petrol and diesel siblings, the EQG retains the independent suspension setup at the front and solid axle at the rear with the inclusion of four electric motors on either corner being supplemented by a shiftable two-speed transmission.

Despite declining to provide details of the powerunit, or indeed divulge any aspects of the interior, reports are that the EQG will be offered in a choice of two models;  EQG 560 and EQG 580 with the latter reportedly having as much as 373 kW while offering a range of 500 km.

Still billed as a proper 4×4 by the three-pointed in spite of the electric switch and possible eschewing of its trademark three diff-locks, the EQG will reportedly also be the first G-Class to tip the scales at more than three-tonnes despite the battery pack having been integrated into the chassis in order to keep weight and the centre of gravity down.

Being almost production ready, expect only small changes, if any, to be implemented for the production model once given the go ahead. Details surrounding outputs is anticipated soon.