Like the Starlet and Urban Cruiser, the Rumion originates from Toyota's partnership with Suzuki. 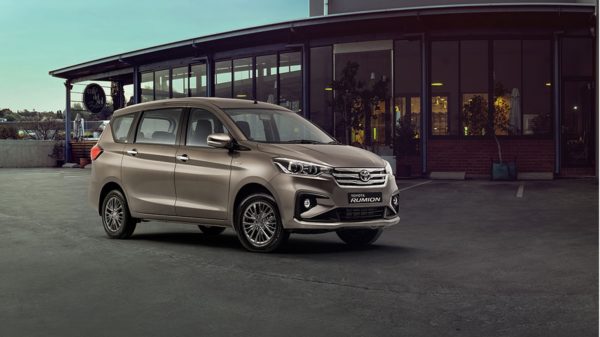 As already noticed, the Rumion is based on the Suzuki Ertiga.

With it being reported last year that Toyota could further leverage on its partnership with Suzuki and introduce a rebadged version of the Ertiga, the automaker has now officially named the newcomer as the Rumion.

Reviving a name last between 2007 and 2015 on the Corolla Rumion, a boxy Kia Soul-esque MPV marketed as the Rukus in Australia and by Toyota’s long since departed Scion division in the United States as the xB, the Rumion arrives as the replacement for the strong selling but dated Avanza with its styling, bar the Toyota badges and different grille, being otherwise unchanged from the Ertiga.

The third Toyota badged Suzuki model after the Starlet (Baleno) and the Urban Cruiser (Vitara Brezza), the Rumion continues to seat seven like the Ertiga, with power again coming from the normally aspirated 1.5 K15B petrol engine.

Hooked to either a five-speed manual or four-speed automatic gearbox, the unit produces an unchanged 77kW/138Nm with Toyota claiming a combined fuel consumption of 6.2 L/100 km regardless of the transmission.

On the specification front, and in-line with the Avanza’s denominators, the Rumion offers a choice of three grades with items in the entry-level S comprising:

Moving one up, the SX gains a four-speaker sound system with Bluetooth and USB, colour coded bumpers, chrome door handles and colour coded electric mirrors as well as the following:

Sitting at the top of the range is the TX, which boasts 15-inch alloy wheels, keyless entry and imitation wood trim on the dashboard as well as:

New Toyota Rumion: All you need to know
1 week ago
1 week ago
PREMIUM!

New Toyota Rumion: All you need to know
1 week ago
1 week ago
PREMIUM!