Despite the reveal of the Land Cruiser 300, only the 79 single and double versions of the 70-series will feature the 70th anniversary touches. 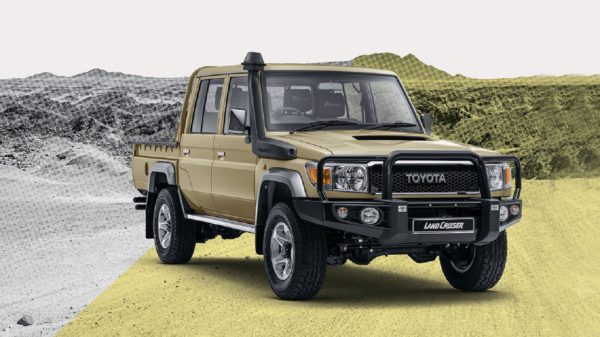 Changes to the Land Cruiser 70th Anniversary at the front are small but prominent.

The announcement made just over three months ago, Toyota has now divulged pricing details of the 70th anniversary edition Land Cruiser on its website.

Already on sale in Australia where production is capped at 600 units, the 70th anniversary, while commemorating 70 years of the Land Cruiser this year as per its name, is limited to the 70-series, more specifically the 79 single and double cabs equipped with the 4.5 D4-D engine.

Aesthetically, the 70th differs from the standard model in the fitting of a new grille with block lettering TOYOTA badging, a black steel front bumper with fog lamps instead of the usual chrome item, a standard rubberised loadbin and tow bar, special 16-inch alloy wheels and 70th anniversary badges.

As mentioned, the 70th anniversary is only powered by the single-turbo version of the 4.5 D4-D diesel V8. Pumping out an unchanged 151kW/430Nm, drive is routed to all four wheels via a five-speed manual gearbox.

For South Africa, two colour options are available; Sand Beige and Ivory White with a three year/100 000 km warranty being standard and a service plan optional.