Partnership nothing new as the current generation 'global' 2 wore both Scion and Toyota badges in the United States from 2016 to last year. 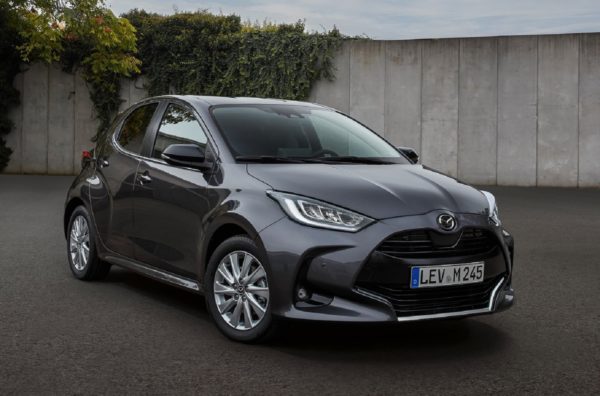 Bar the Mazda badges, the 2 is otherwise identical to the Yaris.

The announcement made almost exactly twelve months ago, Mazda has unveiled the all-new 2 for Europe based on the XP150 generation Toyota Yaris.

Set to go on sale early next year, the 2, bar the replacing of Toyota badges with Mazda ones, plus a small chrome “Mazda2” badge on the bootlid, is otherwise identical to the Yaris externally, with the only change inside being the Mazda logo on the steering wheel.

Dimensionally unchanged from the Yaris as well, the GA-B underpinned 2 will be offered in a choice of three trim levels; Pure, Agile and Select, all powered by the same 1.5-litre hybrid powertrain that develops a combined 85 kW.

The link-up with Toyota coming in response to the controversial new European emissions regulations requiring a manufacturer corporate average fleet of 95 grams of CO2 per km, the 2 starts-up in EV mode and only switches to hybrid once an undisclosed speed is reached.

ALSO READ: Toyota Yaris will serve as a base for next generation Mazda2 come 2022

Hooked to a CVT as standard, the 2 has a claimed fuel consumption between 3.8 and four-litres per 100 km with emissions varying from 87 g/km to 91 g/km depending on the choice of alloy wheels fitted. In Europe, this ranges from 15 to 16 inches.

The arrival of the badge engineered 2, though new for Europe, comes on the back of a similar partnership between the two brands in North America whereby the current “global” 2 spawned the sedan only Scion iA from 2016 to 2018, and the current hatch from said year to 2020 the unique to market Yaris.

As indicated, the 2 is only planned for Europe with no plans to expansion to other markets.