Is that a… yes! Manual Toyota GR Supra officially revealed

The row-it-yourself model will become available in South Africa from the third quarter of the year. 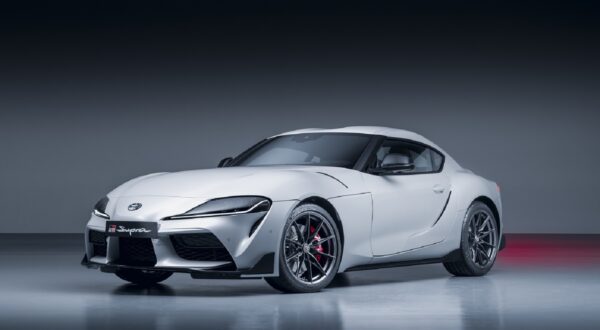 Manual Supra remains unchanged from the automatic when viewed from the front.

Four years of speculative reports began emerging, even before its much-hyped about the launch in 2019, Toyota has officially unveiled the eagerly awaited manual GR Supra that will be coming to South Africa in the third quarter of the year.

Quietly confirmed by Toyota South Africa on the side-lines of the State of the Motor Industry Conference in February, the six-speed manual ‘box, as confirmed by the automaker to The Citizen last month, will solely be mated to the upgraded 3.0-litre BMW sourced B58 straight-six turbocharged engine.

Delivering an unchanged 285kW/500Nm, the inclusion of the ‘box didn’t come with the disclosing of any performance details, however, Toyota did reveal a series of changes had taken place to the transmission itself.

This includes a shortened ratio set compared to the eight-speed automatic, a modified housing, gear set and driveshaft, a larger diameter clutch, removal of certain sound-deadening materials deemed not necessary for the manual, and integration of the iMT or Intelligent Manual Transmission function that blips the accelerator when changing down.

In addition to the new GR gear knob being lightweight at 200 grams according to Toyota, the actual software of the transmission has been altered to limit a loss in power when shifting up, and the standard Track mode, as well as the suspension and steering, revised to aid drifting.

Also recalibrated are the traction and stability control system, as well as the anti-roll bars.

Visually, the manual Supra only differs from the automatic using the Supra script on the boot lid being red, while the interior boasts a revised centre console to accommodate the manual gear lever and an optional Cognac leather finish.

Confirmed to make its official South African public debut this August at the Kyalami Festival of Motoring alongside the new GR86, pricing for the manual Supra, which will catalyze the 285 kW power unit, will be announced at a later stage with current speculation pointing to a starting sticker of around R1.2-million.