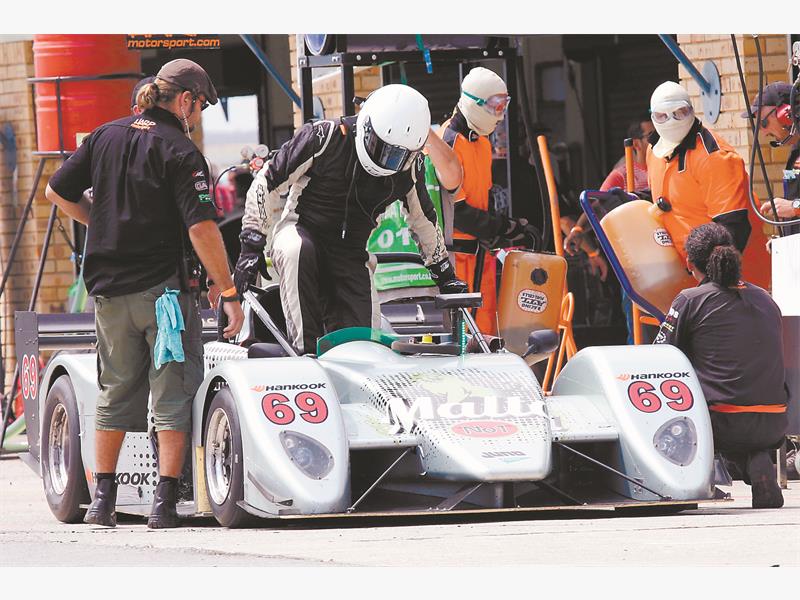 WINNERS. A pit stop for the overall winning Juno Nissan at Phakisa on Saturday, during the annual African 6-hour race. Picture: Steve Wicks.

It was sweet revenge for the team, which narrowly missed winning the same event last year.

The team showed its intentions during Friday’s official qualifying session, when Adcock put the Harp Juno SS3 on pole.

They led the Pilot Pens Shelby of Alan Eve, Ben Morgenrood and George Ferreira, with the Liqui Moly version of Rui Campos, plus sons Jason and Keegan heading row two.

Toby Venter took his works Porsche GT2 into the pits shortly after the start and built up a sizeable lead by the first pit stops.

Then the car lost a fan belt, overheated, and retired with a damaged engine.

That left the V6 Nissan-powered Juno in the lead, while a good scrap developed for the other podium places.

The Campos car was the next hopeful to falter as a fuel pump failure saw it retire having completed 46 laps.

The Q-Nomy Shelby of Thomas Reib and Sean Greve enjoyed a brief spell in the lead as pit-stop strategy became apparent.

However, the Juno remained in control and co-drivers New Zealand sports car champion Dean McCarroll and Francis Carruthers were fast and reliable as the team eked out a four-lap advantage by the time the flag fell.

Reib and Greve put in a solid performance to scoop second place, five laps clear of the Strike Racing Shelby in the hands of Andrew Strike, Des and Jade Gutzeit.

Last year’s Welkom 2-hour winners Ian Smith, Stuart Mack and Elna Croeser were next after a steady, but reliable, run that saw them well clear of the NAC Helicopters/Master Power Technologies example of Alister Brown, Menno Parsons and Craig Shorter.

They finished a lap ahead of the Bigfoot Express Porsche 996 of Sun Moodley and Andrew Culbert.

A number of fancied runners retired.

After qualifying seventh, the Vaal Fluid V10 Dodge Viper driven by Charl Arangies retired when it spectacularly burst into flames whilst being refuelled during its first pitstop.

Nobody was injured, but it required a lot of fire extinguishers as red hot brakes kept re-igniting the fuel leaking from damaged fuel lines.

Another front runner to suffer was the Radical V8 which had gearbox problems throughout the weekend and limped to the finish with only 1st, 5th and 6th gears operational.