Second place as Giniel de Villiers fights on at Dakar

But despite a sterling drive, he can't quite catch the overall leaders. 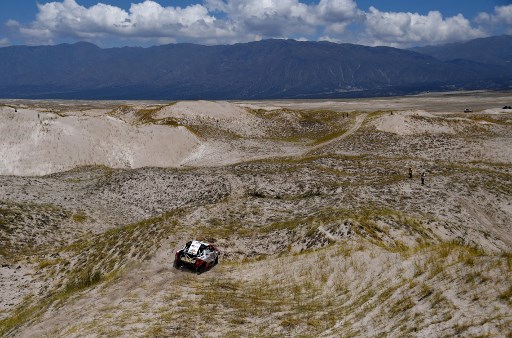 Toyota's driver Giniel De Villiers of South Africa and his co-driver Dirk Von Zitzewitz of Germany compete during the Stage 10 of the Dakar 2018 between Salta and Belen, Argentina, on January 16, 2018. / AFP PHOTO / FRANCK FIFE

Despite producing another superb effort on stage 10, South African contender Giniel de Villiers was unable to chase down the men ahead of him, as he continued to trail the leaders at the Dakar Rally.

De Villiers was second on Tuesday’s leg between Salta and Belen, completing the stage nearly 10 minutes off the pace of French driver Stephane Peterhansel.

“Except for a puncture all went well! Tom Fiambalá which will also be very hard!”

Spaniard Carlos Sainz retained the overall lead, with Peugeot teammate Peterhansel climbing to second place, as they retained control of the race up front.

The local Toyota Gazoo Racing SA team were still working to keep up the pressure from behind, however, and while Nasser Al-Attiyah of Qatar slipped to third in the general classification, Dutchman Bernhard ten Brinke remained in fourth position and De Villiers held on to fifth.

On the bikes, David Thomas continued to lead the South African charge, moving up two spots to 43rd overall on his Husqvarna, though he was more than 10 hours behind KTM rider Matthias Walkner of Austria who held the overall lead.

The 11th stage of the two-week race, to be held on Wednesday, was set to include a 467km liaison and a 280km special.