Al-Attiyah sets up a cracking Dakar

Despite looking increasingly unlikely of catching Peugeot, the Qatari and his SA teammate Giniel de Villiers keep on fighting brilliantly. 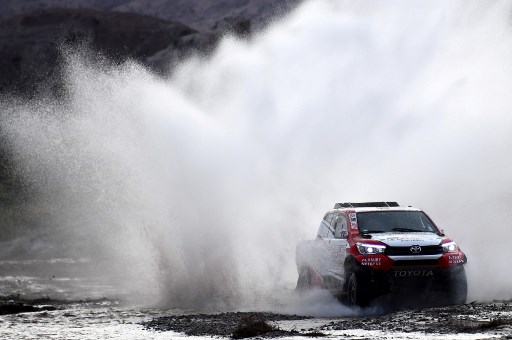 Tightening the screws in his relentless chase, Qatari driver Nasser Al-Attiyah narrowed the gap with a gutsy performance on the 12th stage of the Dakar Rally, though the Toyota Gazoo Racing SA team remained trapped in the dust left by their Peugeot opponents.

Setting up a thrilling finish to the two-week race, Al-Attiyah was quickest over the 523km leg in Argentina on Thursday, covering the longest stage of the race two minutes faster than Peugeot driver Stephane Peterhansel of France.

Despite settling for ninth place, Spaniard Carlos Sainz remained well clear up front, nearly 45 minutes ahead of Peterhansel at the top of the overall standings.

Al-Attiyah was a further 21 minutes back in the general classification, followed by Toyota Gazoo teammates Bernhard ten Brinke of the Netherlands and De Villiers, who were lying fourth and fifth respectively.

Meanwhile, the terrain was deemed too dangerous for bikes and quads, and the 12th stage was cancelled for safety reasons in those two categories.

Austrian rider Matthias Walkner retained his lead in the two-wheel division, and David Thomas was still the best of the SA contingent in 38th position.

Competitors were facing 929km of driving, including a 369km special, on Friday’s penultimate stage between San Juan and Cordoba.