Double win for spicy Pepper in the Engen Polo Cup. 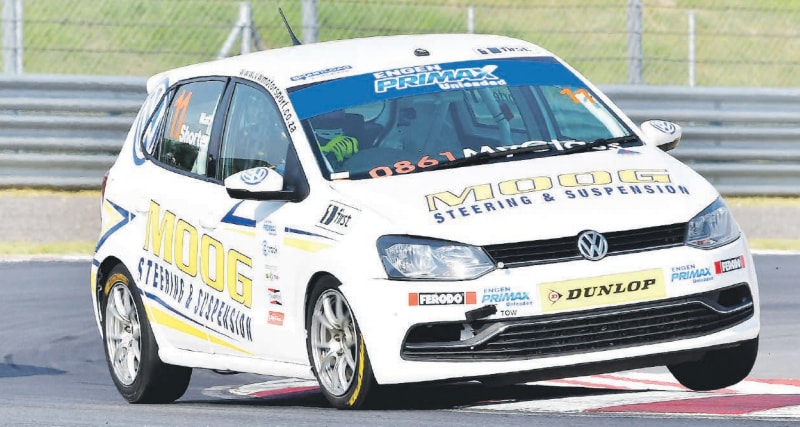 CHARGER. Matt Shorter (MOOG Polo) should be a front runner in the Engen Volkswagen Cup races.

Brilliant racing, an overall circuit lap record and a large crowd typified round three of this year’s national Extreme Festival series at the Zwartkops Raceway on Saturday.

The opening race for G&H Transport Extreme Supercars brought spectators a huge bonus when Charl Arangies blasted his Stradale Aston Martin Vantage GT3 around the 2.4km circuit in a time of 59.89sec.

That gave him the overall Zwartkops lap record, plus the first official sub-one minute lap time in a race car at the circuit.

A notable retirement was that of Joubert, whose Lotus blew its engine on the warm-up lap.

Race two, held from an inverted starting grid, saw Rowe snatch the lead and calmly hang on to it throughout the 12 laps.

He was chased hard and all the way by Bonafede, Stephen, Moss, Wolk and Van Rooyen.

After the restart Tasmin Pepper (Electric Life Polo) sailed into the lead and stayed there, followed over the finish line by Jeffrey Kruger (Universal Health Polo) and Darren Oates (Payen Polo).

However, Kruger was excluded from the results due to his involvement in the first corner crash.

Pepper also led race two from start to finish, ahead of Kruger and Justin Oates.

In the process, she set an Engen Polo Cup lap record at the circuit.

24 Hours of iLamuna: More than just another motor race
5 days ago
5 days ago
PREMIUM!

24 Hours of iLamuna: More than just another motor race
5 days ago
5 days ago
PREMIUM!