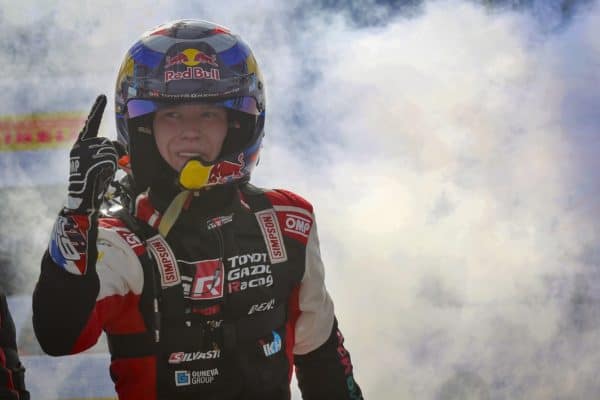 Estonia was the home rally of Hyundai Shell Mobis WRT driver Ott Tänak and Toyota Gazoo Racing WRT’s Kalle Rovanperä and was an event which could well bring out the best in both drivers. The rally is renowned for its very high speed gravel stages which both drivers enjoy, but the many tight technical sections could catch out the unwary

Following the official Thursday evening start in Raadi, the teams moved to SS1at the Tartu parkland area next to the service park and it was the Toyota Gazoo Racing Yaris of Rovanperä with co-driver Jonne Halttunen taking the honours from Hyundai Shell Mobis WRT’s Craig Breen and co-driver Paul Nagle by just 0.1 second and followed in third the M-Sport Ford Fiesta of Teemu Suninen with co-driver Mikko Markkula 0.4 seconds back.

Friday, Day 2 of the rally and it was road sweeping once again for the Toyota Gazoo Racing WRT as Sebastien Ogier and co-driver Julien Ingrassia and Elfyn Evans with Scott Martin, who headed the field into the day’s eight special stages.

It was however the Hyundai Shell Mobis i20 of local hero Tänak and co-driver Martin Järveoja who struck first with a win on SS2. But the day was to prove punishing and it was the Estonian first to hit trouble when he lost 20.7 second due to a front right puncture in SS3, next up was M-Sport Ford’s Gus Greensmith and co-driver Chris Patterson who stopped twice in the same stage with water pump issues.

Breen was to suffer as he ran into the dust of the stricken Fiesta and dropped 10.2 seconds but received a notational time from the organisers, Rovanpera took the stage and the lead of the rally.

Stage 4 was to be the end for Tanak as his i20 left the road drove through a field and rejoined the stage, but not long after he was to stop with two punctures and retired for the day. Breen once again encountered Greensmith’s ailing Fiesta losing 3.5 seconds but was to receive another notational time.

Thierry Neuville and co-driver Martijn Wydaeghe and Ford’s Suninen both lost time to punctures in the same stage allowing the Toyota of Takamoto Katsuta and co-driver Daniel Barritt to take the third fastest time on the stage. Unfortunately it would be the last stage for the Japanese driver as a heavy landing after a jump injured his co-drivers back and the team was forced to retire.

Rovanperä held the lead from the chasing Breen as Neuville began to make up time on Ogier in third, the Frenchman’s team mate Evans, appeared to be struggling to match the overall pace and had to settle for fifth overall. At the end of day 2 Rovanperä held an 8.5 second lead over Breen, followed now by Neuville who had taken third from Ogier.

Saturday, day 3 of the rally and it was the overnight leader Rovanperä who started the day by winning SS10 at a blistering pace almost tripling his lead over Breen, it was to be his last stage win of the rally.

Greensmith and Tänak had rejoined the rally that morning and the local hero was out to please his fans, despite no longer able to score any points other than Power Stages, but he was to be fastest on eight further stages with Neuville winning five more The Belgian was on a mission to open the gap to Ogier and by SS16 was 16.2 seconds ahead of the Frenchman.

By the end of the day, Rovanperä had progressively increased his advantage over Breen to hold a 50.7 seconds lead, Neuville in third now holds a 17.9 second over Ogier who in turn led Evans by almost 25 seconds ensuring the reigning champion still led the 2021 title chase.

Sunday and the final day, for most of the crews it was time to protect their positions rather than go all out for stage wins, but the Hyundai team wanted to grab as many points as possible and Tänak and Neuville were to win all the remaining stages and take first and second on the Wolff Power Stage.

Having led the rally for all but two of the event’s 24 stages, held over some of the fastest roads in rallying and taking six out of eight stage wins on Friday Rovanperä and Halttunen’s victory in Estonia was a demonstration of the crews potential following an expertly controlled drive winning by 59.9 seconds from Breen in second spot with Neuville once again finishing in third place, his fifth for the season.

A great first win for the 20 year old Finn, becoming the youngest driver ever to take victory in a round of the World Rally Championship and the win marked a fifth win in a row for the Toyota Gazoo Racing WRT.

FIA World Rally Championship Drivers (after round 7 of 12)

FIA World Rally Championship Manufacturers (after round 7of 12)