The Motorite BAT Viper pair of Evan Hutchison and Danie Stassen limped home in fifth place on the Atlas Copco Gold 400, final round of the 2013 Donaldson Cross Country Championship, to clinch the year's Special Vehicle championship on Saturday. 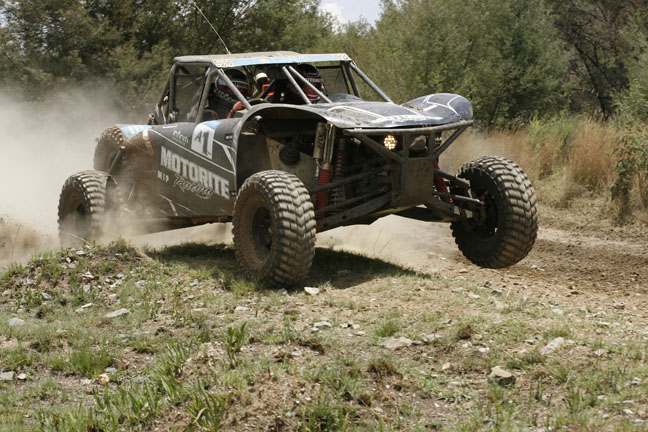 The race was won by Philip de Vries and Johan Viljoen in their Conqueror Porter.

They finished more than six minutes ahead of Quintin Sullwald and Janine Lourens in the Elegant Fuel BAT Venom, with halfway leaders Marius and Jolinda Fourie (PHB BAT) completing the podium.

Fourth place went to Neil Meyer and Joseph Lewis (Maxxis Zarco), with Hutchison and Stassen surviving a string of scares to finish fifth.

Punctures, alternator problems and a broken fan belt all added up to a rather nervous finish for the Motorite crew, who also completed the last 3km with a flat tyre.

De Vries and Viljoen finished second in the Friday qualifying race and put together a consistent weekend.

At the halfway stage de Vries/Viljoen were lying second behind the husband-and-wife pairing of Marius and Jolinda Fourie in the PHB BAT who ran into loop two woes.

The Fouries finished the last 100km with steering problems and could not hold off de Vries/Viljoen and Sullwald/Lourens who ran the last 90km with the car stuck in third gear.

A solid seventh overall clinched the Class P championship for Swaziland driver John Thomson and Maurice Zermatten in a Zarco.