WATCH: Diving among ancient ruins where Romans used to party

The town of Baiae was once a spot for holidaying Romans to drink and party - until it began to sink. 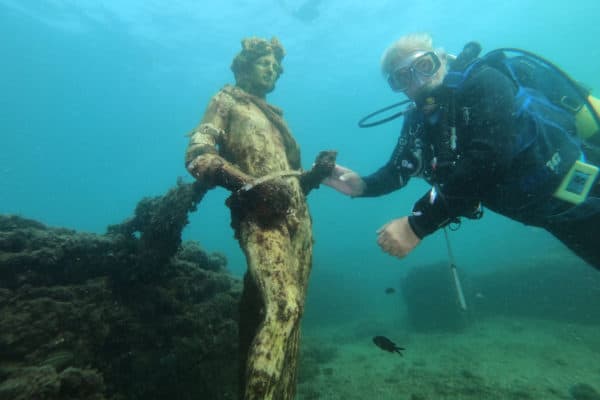 In this photograph taken on August 18, 2021 a dive guide shows tourists a copy of the original statues preserved at the Museum of Baiae, representing Dionysus with ivy crown in the Nymphaeum of punta Epitaffio, the submerged ancient Roman city of Baiae at the Baiae Underwater Park, part of the Campi Flegrei Archaeological Park complex site in Pozzuoli near Naples. - Statues which once decorated luxury abodes in this beachside resort are now playgrounds for crabs off the coast of Italy, where divers can explore ruins of palaces and domed bathhouses built for emperors. Picture: Andreas Solaro/AFP
​

Diving among ancient ruins where Romans used to party. Fish dart across mosaic floors and into the ruined villas, where holidaying Romans once drank, plotted and flirted in the party town of Baiae, now an underwater archaeological park near Naples.

Statues which once decorated luxury abodes in this beachside resort are now playgrounds for crabs off the coast of Italy, where divers can explore ruins of palaces and domed bathhouses built for emperors.

Rome’s nobility were first attracted in the 2nd century BC to the hot springs at Baiae, which sits on the coast within the Campi Flegrei — a supervolcano known in English as the Phlegraean Fields.

Seven emperors, including Augustus and Nero, had villas here, as did Julius Caesar and Mark Anthony. The poet Sextus Propertius described the town as a place of vice, which was “foe to virtuous creatures”.

It was where “old men behave like young boys, and lots of young boys act like young girls,” according to the Roman scholar Varro.

But by the 4th century, the porticos, marble columns, shrines and ornamental fish ponds had begun to sink due to bradyseism, the gradual rise and fall of land due to hydrothermal and seismic activity.

The whole area, including the neighbouring commercial capital of Pozzuoli and military seat at Miseno, were submerged. Their ruins now lie between four and six metres (15 to 20 feet) underwater.

“It’s difficult, especially for those coming for the first time, to imagine that you can find things you would never be able to see anywhere else in the world in just a few metres of water,” said Marcello Bertolaso, head of the Campi Flegrei diving centre, which takes tourists around the site.

“Divers love to see very special things, but what you can see in the park of Baiae is something unique.”

The 177-hectare (437-acre) underwater site has been a protected marine area since 2002, following decades in which antiques were found in fishermen’s nets and looters had free rein.

Divers must be accompanied by a registered guide.

A careful sweep of sand near a low wall uncovers a stunning mosaic floor from a villa which belonged to Gaius Calpurnius Pisoni, known to have spent his days here conspiring against Emperor Nero.

Explorers follow the ancient stones of the coastal road past ruins of spas and shops, the sunlight on a clear day piercing the waves to light up statues. These are replicas; the originals are now in a museum.

“When we research new areas, we gently remove the sand where we know there could be a floor, we document it, and then we re-cover it,” archaeologist Enrico Gallocchio told AFPTV.

“If we don’t, the marine fauna or flora will attack the ruins. The sand protects them,” said Gallocchio, who is in charge of the Baiae park.

“The big ruins were easily discovered by moving a bit of sand, but there are areas where the banks of sand could be metres deep. There are undoubtedly still ancient relics to be found,” he said.

ALSO READ: Books that transport you to another country

WATCH: Mother elephant crushes crocodile to protect her calf
1 day ago
1 day ago

WATCH: Mother elephant crushes crocodile to protect her calf
1 day ago
1 day ago