WATCH: US artist creates sculptures of animals made out of trash

This artist creates intricate sculptures of animals made out of plastic spoons, old ping pong balls and even unused catheters. 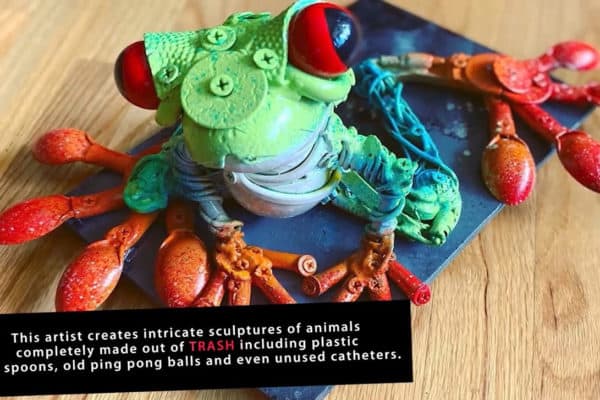 US artist creates sculptures of animals made out of trash. Picture: Screengrab
​

Stephanie Hongo, 35, embraced trash art four years ago because at the time she could not afford art supplies.

Now Stephanie, of Southington Connecticut, has created over 100 detailed artworks of animals sometimes screwing together hundreds of pieces of trash for one piece.

She appeals to friends and family for spare trash and also sources specific pieces from Facebook groups to complete her incredible sculptures of lobsters, octopuses and other animals.

She has used a barbie leg to create a unicorn’s horn, unused catheters as the antennas of a lobster and plastic forks for the feathers of an owl.

Stephanie, who creates her art under the name Sugarfox, explained that she turned to trash to make her artworks as she was strapped for cash after quitting her job as an artist-in-residence at grocery store chain Trader Joe’s in May 2017.

She was inspired by Portuguese artist Bordalo II who makes large scale installations out of trash.

“I was looking at Bordalo’s work and I thought: I know I can do this, it appeals to me so much.

“I wished I could find someone to commission me to do a big trash piece but then I realized I could do it smaller.”

She began by digging out the trash in her own home but quickly ran through it and turned to her friends and family.

“I started getting stuff from my house like Tupperware and old purses.

“But very quickly I ran out of stuff that was usable. I asked my friends and family.”

Stephanie asked mainly for plastics as it was the easiest material to drive screws into and the most durable.

“Everyone has trash and I ended up with too much stuff.

“I have a mountain of junk in my basement now.

“I started to really fine-tune what I was asking for from people.”