After years of study, Lika Gorokhowa from Moscow is fluent in speaking Afrikaans and speaks the language confidently. 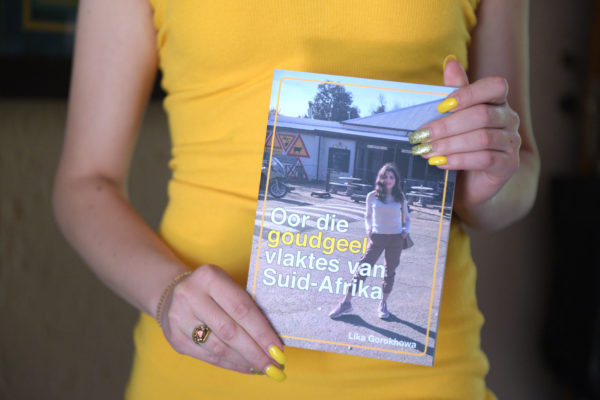 If you happen to see a new book on the shelves titled Oor die goudgeel vlaktes van Suid Afrika, you’d be mistaken thinking it was written by a local South African author.

More than fours years ago, Lika Gorokhowa, a young student at the Moscow State University, chose language as her field of study.

Lika Gorokhowa: A passion for languages

Her professor, Monica Urp, made Gorokhowa and her fellow students fall in love with South Africa long before she even made her first trip to the county.

Now after years of study, Gorokhowa is fluent in Afrikaans and travels regularly to South Africa. She speaks the language confidently and surprises many locals with her love for it.

She came to South Africa for the launch of a book called, Persoonlike vriendskappe – Boere en Russe, by Wessel Oosthuizen and Nico Moolman.

The book, an account of the relationships between the Russian and the Boere of South Africa, was launched recently.

Gorokhowa was chosen by her university to come to South Africa to represent her department at the launch.

She says: “I am very proud to be chosen to take part in this wonderful occasion and to come to South Africa and to discover the world I have been reading about and learning about for four years in university.”

She began learning Afrikaans back in 2017. It took her four years to be able to speak confidently enough.

“Of course there is still a lot to learn and you never actually stop learning a language.”

As part of her studies, Gorokhowa also studied isiZulu.

“The language is very different from any other language I have learnt. It was quite a challenge.”

It became easier by listening to songs and through the songs, she felt a stronger connection to South Africa.

“You feel the people who speak the language,” she adds.

She can fluently speak English, Afrikaans, French and a bit of isiZulu.

Gorokhowa says being able to greet people in their own language is a form of respect and also the most important part of communication.

During her first visit to South Africa, she experienced so much. Even though she was so far from home, the similarities of the people and places was interesting and she started a journal filled with all her experiences.

She wrote in Afrikaans while she was travelling, while also attaching pictures and memorabilia.

Her journal became so full that author Wessel Oosthuizen, with whom she was travelling, suggested she turn it into a book.

It would be the first book to be in written in Afrikaans by a Russian traveller.

The book, titled Oor die goudgeel vlaktes van Suid Afrika, is filled with experience and pictures from all over South Africa – from Cape Town to Kimberly to Tshwane and many other towns.