Diaz no match for Budler power

It seems that Hekkie Budler can do no wrong at this stage of his career and the diminutive fighter proved it with another good performance on Saturday night. 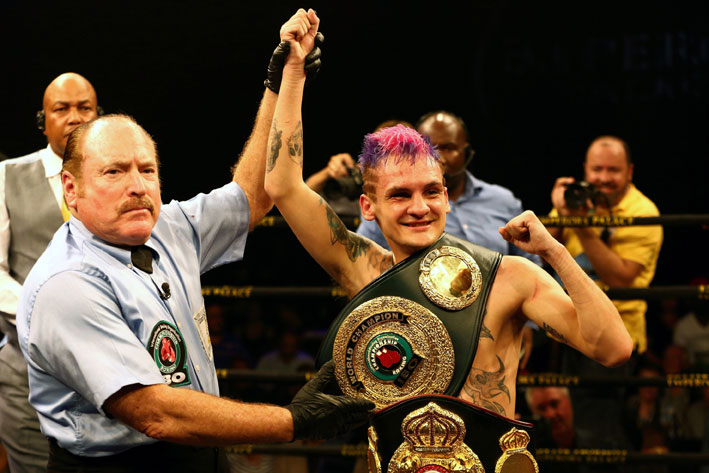 A triumphant Hekkie Budler of South Africa celebrates after knocking out Colombian Karlius Diaz in the first round at Emperors Palace in Kempton Park, east of Johannesburg on Saturday, 1 March 2014. Picture: Jacques Cato/SAPA

The 25-year-old has never been considered a power puncher, but it’s a perception that’s slowly changing after he stopped Colombian Karluis Diaz inside one round to retain his IBO and WBA minumweight world titles at Emperors Palace.

It was clear from the opening bell that the “Hexecutioner” was keen to apply pressure on his Colombian opponent as he went to work with a barrage of punches early before making full use of an opening in Diaz’ defence to plant an overhand right that floored him. The official time of the stoppage was 2:59.

Another fighter who appears to be improving with every outing is Ryno Liebenberg. Heading into his bout against Joey Vegas for the WBC international light-heavyweight title it was thought that the unbeaten fighter would be tested.

But the “Lion” rose to the occasion in a big way as he absorbed early punches before turning the tables and putting Vegas down for an eight-count. The WBC rated No 5 managed to get up it was apparent he wouldn’t last as Liebenberg applied pressure. A halt was called at 2:56.

There was also a typically rugged performance from Johnny Muller in the third of the title fights on the “African Explosion” bill when he won the vacant WBC silver international light-heavyweight belt.

The bout against Namibia’s Willbeforce Shihepo wasn’t a display of slick boxing prowess but rather a full-blown brawl as the two traded leather for 12 rounds. By the end of the contest it was a bloody Muller who had his hand raised with the judges split in their decision.

In the remainder of the under card fights, Adam de Moor scored a good points win over Jeff Otiembo in their junior-welterweight contest over six rounds, while Ricardo Hiraman stopped Phumudzo Monyai in the third round of their featherweight clash.

Thabang Ramagole had a six- fight unbeaten streak ended when he lost on points to Sibusiso Twane in their junior-flyweight contest.