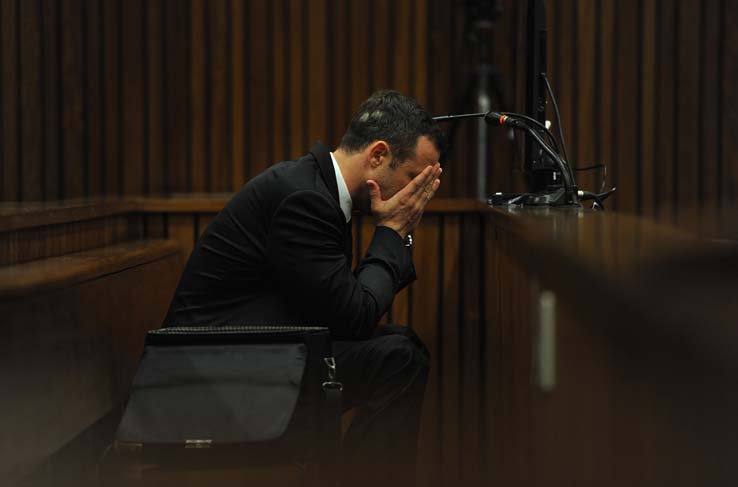 Paralympian Oscar Pistorius is seen on the fourth day of his murder trial at the North Gauteng High Court in Pretoria on Thursday, 6 March 2014. Pistorius is accused of shooting dead his girlfriend model Reeva Steenkamp on Valentine's Day last year. Picture: Werner Beukes/Pool

Were the terrible screams of anguish and fear which shattered the early hours of Valentine’s Day last year at Silverwoods estate the desperate last cries of Reeva Steenkamp or those of a man who had just realised he had accidentally shot dead his beloved?

This is but one of the riddles Judge Thokozile Masipa will have to unravel when she eventually hands down judgment in the Paralympian’s murder trial.

Pistorius last Monday not only denied that he had willfully murdered his law-graduate-turned-model girlfriend, but accused the state of trying to “assassinate” his character.

As his senior advocate, Barry Roux, relentlessly tore into the State’s witnesses it became clear that the first week of the trial was probably only a tame forerunner of the legal fireworks still lying ahead.

Lead prosecutor Gerrie Nel made it abundantly clear that the State intended to prove Pistorius had deliberately shot dead Steenkamp through a locked toilet door after an argument.

Roux made it equally clear that the defence would prove Steenkamp’s death had been a tragic accident and that Pistorius and his beloved Reeva never had an argument.

Roux put it to several of the witnesses, who testified that they had heard a woman screaming in fear before hearing shots, that they had mistaken the sound of Pistorius breaking down the bathroom door with a cricket bat for shots and the woman’s screams for Pistorius’s own cries of anguish.

Both sides indicated that they had teams of experts waiting in the wings to bolster their cases.

The State and defence have already made reference to the cellphone records of many of the role players.

Roux referred to medical evidence about Steenkamp’s devastating head injuries and the possibility of her being able to scream after being shot in the head.

From questions put to witnesses it became clear that the defence would probably also call experts about how sound travelled in that area at night; if it was possible to hear screams from outside; and just how “surprisingly” Pistorius sounded like a woman when frightened.

It further became evident that the defence differed from the State’s version of the sequence of shots which hit Steenkamp in the upper leg, arm and head as well as the sequence of events that night.

The defence already has a private pathologist, ballistic and blood splatter experts and scene reconstruction experts lined up to challenge the State’s experts.

However, many legal experts have pointed out that, despite this dissection of the night’s tragic events, Pistorius’s case could in the end stand or fall on the strength of his own evidence and how he fares in the witness box.

Pistorius, who has to battle crowds of photographers and cameramen when he enters and leaves the court, mostly appeared to be calm and collected, but became very emotional and clamped his hands over his ears every time witnesses testified about Steenkamp’s devastating injuries.