Despite the bylaws prohibiting the disposing of dead animals in public areas, most ceremonies are done at night. 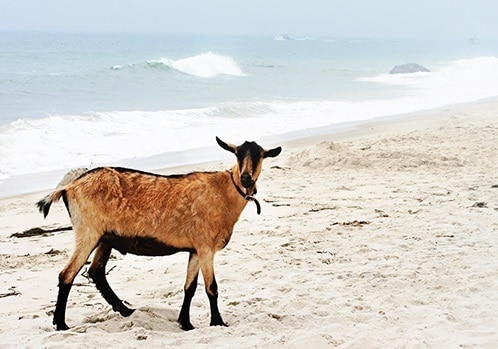 A religious ceremony held at Palm Beach in Richards Bay, in KwaZulu-Natal, on Sunday morning involving the slitting of a goat’s throat at the tideline, made onlookers foam at the mouth, Zululand Observer reports.

Beachgoers have on many occasions raised concerns regarding health hazards and legal rights of slaughtering chickens on Zululand shores, but a witness said Sunday’s ritual was unacceptable.

“We went to walk our dog, only to find a poor goat tethered and waiting for slaughter,” said Bev Thole.

“We had seen church people going through, so I thought we are going to see poor chickens slaughtered again, but this time, it was a goat. I told the guard there it is not allowed on a public beach, and he just answered ‘yes’.”

“I then called the Richards Bay SPCA. It is just awful that people are doing this, and no one cares.”

After her call, SPCA inspector Wynand Strauss arrived on site and ensured the animal was sacrificed humanely.

“Our hands are tied, as these rituals all fall under municipal bylaws,” said Strauss.

uMhlathuze Municipality spokesperson Mdu Ncalane said the bylaws prohibited the disposing of dead animals in public areas, but the ceremonies were difficult to keep in check. Most of these rituals take place during the night when policing is focused on residential areas.

“As much as we are considerate of all rituals and different religions and cultures, the city urges all concerned to adhere to our safety and health guidelines.”

Ezemvelo KZN Wildlife honorary officer Henning de Wet said while there was no ecological impact, it did raise health concerns as many of these carcasses were simply left behind to decompose.

“Not only is this very unpleasant for people to see, but carcasses end up carrying diseases. Our beaches belong to the municipality responsible for removing carcasses, but our coastal ecosystem also consists of many organisms to help clean the beach such as ghost crabs, so it should not cause environmental damage,” said De Wet.

“From a tourism aspect, tourists sometimes find it interesting watching these ceremonies. Many do not like to witness it, but in a democratic and diverse country like ours, we need to respect each others’ beliefs, traditions and cultures.”