Alleged fraudster out on bail for R122m scam

It is alleged Louwrens promised clients a sizable return for investing through him, but he instead disappeared with their money. 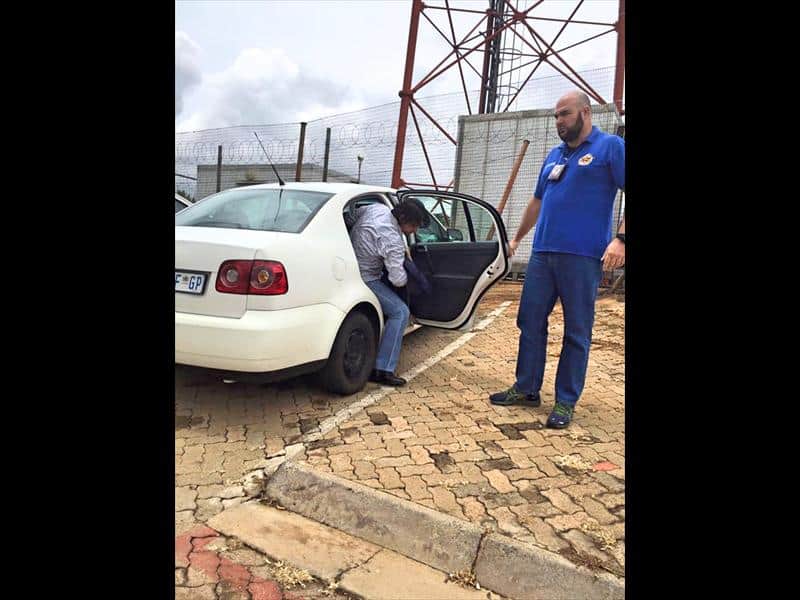 Danie Lourens gets out of a police car at the Lyttelton police station after his latest arrest led by IRS senior investigator, Andre van Wyk. Photo: Supplied.

“A well-known conman” is out on bail after he was arrested during a joint sting operation between the Lyttelton police and IRS Forensic Investigation.

It is alleged Louwrens promised clients a sizable return for investing through him, but he instead disappeared with their money.

“The detectives are still trying to establish if he can be linked to other cases,” Miller said.

The IRS, which investigates financial crimes and works closely with law-enforcement agencies, said it was investigating several other fraud cases linked to Louwrens.

IRS spokesperson and chief forensic investigator Chad Thomas said “Louwrens’ fraud” ran into millions of rands. According to IRS, there was a great possibility he could be linked to other cases.

“Louwrens is no stranger to the law and has had more than 70 cases of fraud opened against him in the past 15 years. More cases are in the process of being registered against Louwrens, and he allegedly defrauded multiple victims,” Thomas said.

Thomas said some monies were paid to him in cash and some transferred electronically.

Thomas also warned that the only way to effectively combat sophisticated white-collar crime was for the private sector to assist the police where possible.

“The police are working hard to combat sophisticated financial and cyber-crimes. The problem is that these crimes are growing exponentially and all resources, both private and public, must be deployed to counter this growing crime trend.”

According to IRS, it was in possession of documents that showed Louwrens was a frequent visitor to different casinos in Gauteng.

Thomas also said the company had spoken to angry clients who had not opened cases against Lourens still holding on to the hope that he would pay them out.

One of his victims was late veteran actor Johan van der Merwe, of Binnelanders fame, who at the time of his death had invested R500 000 with Louwrens.

A list in Rekord’s possession shows that 73 cases against Louwrens are being investigated in nine towns – Hartebeespoort (33), Lyttelton (1), Mangaung (1), Potchefstroom (4), Vanderbiljpark (23), Vereeniging (8), Newcastle (1), Wierdabrug (1) and Sinoville (1).

According to media reports dating back to 2009, Louwrens swindled investors out of more than R80 million, and escaped arrest twice when the police thought they had him cornered in his home in Hartebeespoort.

In 2005, Louwrens escaped prison time by entering a plea bargain with the state to pay back all his victims.

Cele to unrest inquiry: I don't recall seeing top cop Sitole in the 'right places'
12 hours ago
12 hours ago

Cele to unrest inquiry: I don't recall seeing top cop Sitole in the 'right places'
12 hours ago
12 hours ago