The victims were assaulted with fists, planks and other weapons. 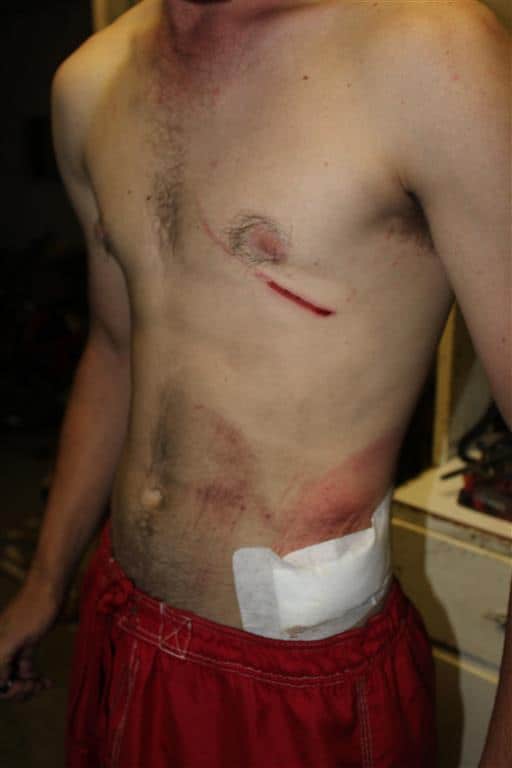 JD van Dyk shows some of the stab wounds and bruises he sustained after he was attacked by a mob who thought he and his friend were 'nyaope boys'.

Taxi owners and their drivers yesterday, March 15, decided to take the law into their own hands to ‘clean up’ the taxi rank in Onder Street, Limpopo, Review Online reports.

Police were called and arrived at the scene between 9am and 11am following reports of the violent mob assaulting people they believed were involved with the ‘nyaope boys’ they wanted to eradicate in their ‘cleanup operation’ of the taxi rank.

Upon arrival, police were threatened by the mob who said they would vandalise their vehicles and assault them. JD van Dyk and his friend Louis Pienaar were assaulted by an angry mob in the CBD.

The incident relates to a matter where two young men (both 18 years of age) were attacked and assaulted in the Central Business District (CBD) while looking for employment.

“We were handing out our Curriculum Vitae’s [CV’s] in the hope of finding a job. We were in Dahl Street where we handed our CV’s in at some of the shops when we noticed a mob rounding the corner coming from Rissik Street,” one of the victims, JD van Dyk, told Review.

He said the mob walked up to them and demanded that they give them the dagga and nyaope in their possession.

“We were completely flustered, as we did not know why they were demanding drugs from us.

“When we attempted to tell them we didn’t have any drugs, they assaulted us with their fists, planks, and other weapons, leaving us with no other option than to flee for our lives.”

Van Dyk said he and his friend, Louis Pienaar, became separated during their flight, and he attempted to seek refuge in some of the businesses in the area.

Here he was met with people shoving him back into the street and closing the doors in his face because they “did not want to get involved”.

During his flight, Van Dyk found his friend, who was fleeing from part of the angry mob, after which they fled to a business in Nirvana, where the owner of the store offered them salvation while he phoned the police and their families.

“All I could think of was running. I did not know where my friend was or if he was alive, all I knew is to run as fast as I can,” Van Dyk recalled the incident.

A case had not yet been opened, as they were first rushed to hospital for their injuries, which included stab wounds and several bruises.

Van Dyk’s father, Jopie, said although they were glad they survived the ordeal, it saddened them that there were so many who turned a blind eye to what happened to them.

Pienaar said: “When I saw the door of the business where I sought help close in front of my eyes, I felt helpless. Please be aware of your surroundings, it happened so fast, and it can happen to anyone.”

Polokwane police spokesperson Warrant Officer Lesiba Ramoshaba urged the parents to open a case with the police so they can investigate the matter.

With regard to the disruptions still ongoing in the CBD, Ramoshaba said police are closely monitoring the situation and they would release a press statement soon.

WATCH: Giant bullfrogs frolic in Gauteng after heavy rains
6 hours ago
6 hours ago

WATCH: Giant bullfrogs frolic in Gauteng after heavy rains
6 hours ago
6 hours ago