The Anguish of Reeva’s mother

Reeva Steenkamp's mother, June, had to be consoled after listening to evidence about the bullet wounds which ended her daughter's life on Valentine's Day last year. 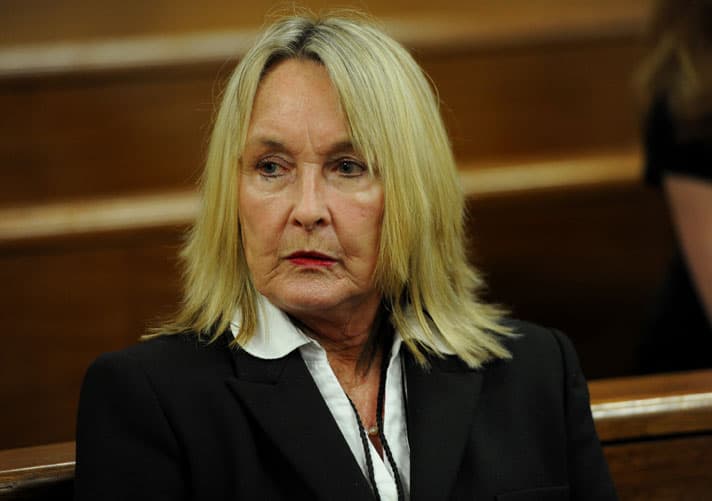 Oscar Pistorius, who is on trial for Reeva’s murder, and his sister Aimee both sat with their heads in their hands while ballistics expert Capt Chris Mangena referred to close-up post mortem photos of the bullet wounds in Reeva’s head, hip, arm and hand.

At one stage Pistorius held his hands over his ears, but did not throw up as he had on previous occasions when witnesses testified about Reeva’s wounds.

His supportive sister hugged him tightly after the trial was adjourned for the day.

Several Pistorius family members, including his uncle Arnold, were in the first row to support him.

Earlier his uncle also briefly spoke to Reeva’s mother, who was supported in court by a long-time friend and members of the ANC Women’s League.

Capt Mangena, of the police’s forensics laboratory, testified he had received the bathroom door which had been removed from Pistorius’s house on March 8.

The door was still sealed in a body bag and Mangena helped to reinstall the door at Pistorius’s house the following day.

He had used steel rods and a laser beam mounted on a tripod to determine the angles at which the bullets had penetrated the door.

His measurements of the four bullet holes on the right side of the bathroom door showed they had been fired at heights varying from 93.5cm to 104.3cm from floor level.

He also took measurements of a ricochet mark and the mark where the bullet had hit the tiles in the toilet.

He concluded that one of the bullet holes through the door coincided with the ricochet mark on the tile.

Mangena said he had requested photos of the crime scene to see where all of the cartridges were, as well as photos of the post mortem and the victim’s wounds.

He also requested the clothes Reeva was wearing when she was shot, noting bullet holes and body tissue on the chest area of her black vest.

He further received Pistorius’s plea explanation, which he used as a “benchmark” for his recon-struction of the scene.

Mangena was present when Dr Heinrich Nolte took measurements of Pistorius’s height, with and without his prosthesis.

Mangena had requested the measurements after seeing Pistorius’s explanation that he was not wearing his prosthesis when he fired the shots through the bathroom door, hitting Steenkamp.

Pistorius insists he thought Steenkamp was an intruder and that her death was a tragic accident.

Mangena referred in detail to each of the bullet wounds and bruises on Reeva’s body.

The court adjourned before he could reach his conclusions.

Pistorius’s advocate, Barry Roux, previously put it to another State witness that Mangena’s report supported his client’s version that he had been on his stumps when he fired the shots.

Roux said the photos showed that Van Staden could not have been alone when he photographed the scene, but Van Staden insisted he had never seen Motha while he was taking photos.

Van Staden testified he had requested Motha’s removal from the scene after hearing he had touched the alleged murder weapon with his bare hands. This was despite Motha being a superior officer.

The trial was delayed for over an hour so that Van Staden could find the original master copies of the photographs he took at the crime scene.

He later explained he had to first receive permission from his superior officer to bring the master copies to court and then forgot he had the copies in his possession all the time.

He had not followed normal procedure, but had locked the original CDs in a cabinet in his office at the request of one of his superiors.